MANILA, Philippines – The legal showdown has begun between the 2 wives of the late Negros Occidental Rep Ignacio “Iggy” Arroyo, whose burial depends on the outcome of London court hearings on Monday, February 20.

Lawyers of both camps – of legal wife Alicia “Aleli” Arroyo and of common-law wife Grace Ibuna – have presented arguments that could also prove instructive for Filipinos entangled in similar cases. 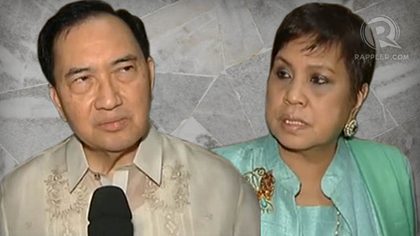 Aleli’s lawyer, Lorna Kapunan, has cited Article 305 of the Civil Code of the Philippines in defending her client’s right over the remains of the late representative.

“The duty and the right to make arrangements for the funeral of a relative shall be in accordance with the order established for support, under Article 294,” the Civil Code says.

Aleli’s camp has asserted that her marriage to Arroyo was never annulled. Thus, Aleli remains his next of kin, Kapunan argued.

It is the turn of Ibuna’s camp to testify before the RTC on Monday.

Kapunan said Aleli has not participated in the case in London because it “has no jurisdiction over (Filipino) citizens or competence on (Philippine) laws.”

“Any claim on estate must be brought before (a Philippine) court in due time – not now,” Kapunan added without elaborating.

On the other hand, Ibuna’s lawyer, Leonard de Vera, cited Article 307 of the Civil Code in upholding his client’s claims.

“The funeral shall be in accordance with the expressed wishes of the deceased,” Article 307 says.

A will supposedly left by Arroyo gives Ibuna, instead of Aleli, the rights over his remains. The will is part of the evidence presented in London.