DENR exec on mining audit: Not true there was no due process 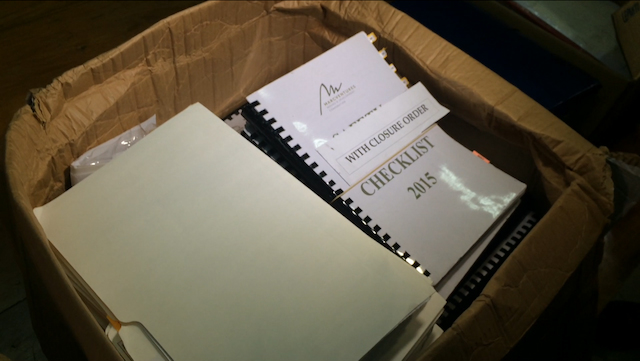 MANILA, Philippines – Boxes of documents related to the mining audit were presented to reporters on Friday, February 24, as an environment official reiterated that the Department of Environment and Natural Resources (DENR) followed due process in conducting the audit.

“This is what we have. We’re being transparent, but you have to go through the process of securing these documents,” Environment Undersecretary for Legal Affairs Maria Paz Luna said in a press conference Friday.

She addressed criticism from the mining industry that the DENR did not follow due process when it ordered the closure and suspension of 28 mining operations in the country.

“Nakakainis ‘yung ‘di daw transparent (It’s annoying when they say we’re not transparent). The ones requiring transparency want it to be served to them on a silver platter…. Use our FOI [Freedom of Information] manual to secure these documents,” Luna added.

According to the DENR, there are 7 steps that must be followed for an audit to be credible:

“The mere fact that mining companies replied to the DENR’s audit findings means that they acknowledge due process was being observed,” Luna said in a separate statement.

In addition to the 7 steps, the DENR also enumerated 7 laws relevant to the mining audit. The department said each mining firm’s audit findings clearly state which violations of these laws were committed:

According to a Business Mirror report, the Mining Industry Coordinating Council (MICC) is set to form 5 technical groups that will review the DENR’s closure and suspension orders.

Luna said the DENR will take part in the review since the environment secretary is co-chair of the MICC.

“During the meeting of the MICC, one of the things I said was, can you assume already the regularity of performance of function? But of course this is an industry that was not used to this level of implementation, so I can just guess, but perhaps they’re trying to assuage the fears of the industry, but it’s still not true that there was no due process,” Luna said in a mix of English and Filipino during Friday’s press conference.

Echoing earlier statements of Environment Secretary Gina Lopez, Luna said the MICC is recommendatory to the secretary. She thinks results of the review “would go into a motion for reconsideration for the secretary’s review.”

She’s concerned that many believe the “assumptions of lack of due process” without asking first about the actual process.

“May judgments as to how these decisions were reached, but I’d like to tell you that siguro nangyari lang ‘to kasi matagal nang hindi implemented to the fullest extent ang batas, so inabutan lang kami,” she added.

(There are judgments as to how these decisions were reached, but I’d like to tell you that maybe this is all happening because for so long, we have not implemented the law to the fullest extent, and this just caught up with us.)

Aside from the closure and suspension of mining operations, DENR this month also announced the cancellation of of 75 mineral production sharing agreements in watersheds all over the country, and the issuance of show cause orders to 22 mining companies that failed to complete the deposit of their Final Mine Rehabilitation/Decommissioning Fund. – Rappler.com