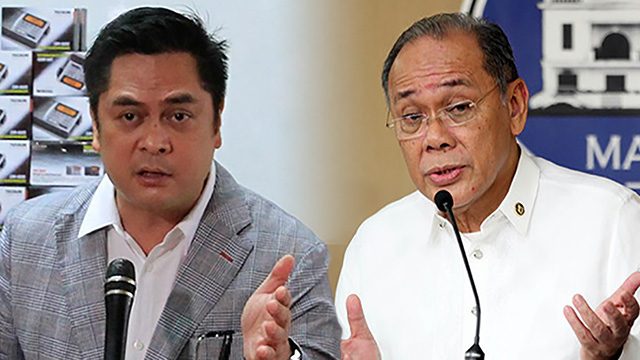 A Palace source trusted by President Rodrigo Duterte told Rappler that after the joint military-police command conference on Monday, February 27, Andanar spoke with Presidential Communications Operations Office (PCOO) officials to issue a directive: from now on, only Abella’s office can release Palace statements while Andanar will focus on overseeing PCOO programs, departments, and the various state-run media.

“PCOO had an internal reorganization, and content and messaging has been assigned to me. Secretary Martin [Andanar] takes care of departmental affairs,” the spokesman told Rappler on Thursday, March 2.

Asked where Palace statements would be coming from, Abella said, “From the Office of the Presidential Spokesman.”

Andanar told reporters that the “entire PCOO Proper ‘Content Group’ is now under Spokesperson Abella” but he might speak “from time to time” if Abella is not around.

Previously, while statements from the President were only delivered by Abella and sometimes Executive Secretary Salvador Medialdea, Andanar and Abella alternated in issuing Palace statements on the pressing issues of the day.

Abella and Andanar also had a shifting arrangement for radio interviews in which the PCOO Secretary would do early morning interviews while the spokesman would entertain interview requests later in the day.

All that seems about to change with the new PCOO policy.

The new directive comes in the wake of a series of communications blunders that became the stuff of recent news headlines.

The first was when Andanar and Abella gave contradicting intepretations of the financial assistance Duterte promised to residents of Surigao during his visit right after the deadly earthquake.

The second was when Andanar claimed Senate reporters were offered $1,000 to cover the press briefing of Senator Antontio Trillanes IV and SPO3 Arturo Lascañas about Duterte’s involvement in Davao City murders.

The new policy on the source of Palace statements is being implemented quietly. PCOO officials have not announced it to Palace media.

A source privy to the matter said the officials have found no need to make such an announcement since it is only an internal arrangement.

Advice from another official?

Two sources told Rappler that Andanar’s new directive likely stemmed from the “advice” of a Cabinet official to Andanar about changing the PCOO’s policy on Palace statements.

It was this official who supposedly suggested that such statements come from only one official to avoid confusion and contradiction. The reminder was supposedly relayed to Andanar on the sidelines of a meeting of Cabinet officials at the Palace.

“No other Cabinet official advised me. It’s part of my reorganization strategy,” he told Rappler.

Press secretaries do not typically issue Palace statements or participate in the regular Palace news briefings, at least early in the administration – unless in cases where there are no designated spokespersons.

In the administration of Benigno Aquino III, PCOO Secretary Herminio “Sonny” Coloma only started joining the regular Palace briefings in mid-2013 out of “desires to continuously improve” Palace communications.

The last time Andanar joined a Palace briefing was on February 21 when he got irritated at a reporter for pressing him on his claim about a $1,000- bribery made on Senate media to cover the press conference of retired Davao cop Arturo Lascañas on the Davao Death Squad.

Since then, he has not issued statements or granted interviews, save for a February 27 press conference about the Chinese embassy’s assistance to the PCOO. – Rappler.com