Congressmen’s trip to West PH Sea cancelled due to rain MANILA, Philippines – A planned trip of a contingent from the House of Representatives to Pag-Asa (Thitu) Island in the West Philippine Sea (South China Sea) did not push through on Thursday, March 17, due to rain.

The runway is too soft for planes to land and it would have been unsafe to push through with the trip, according to the military. (READ: Still no plan to fix runway in West PH Sea)

“The Armed Forces of the Philippines, through the Western Command (Wescom), regrets that it had to disallow the intended flight of Representative Harry Roque to Pagasa Island on March 17 because of safety issues,” Wescom spokesman Captain Cherryl Tindog. 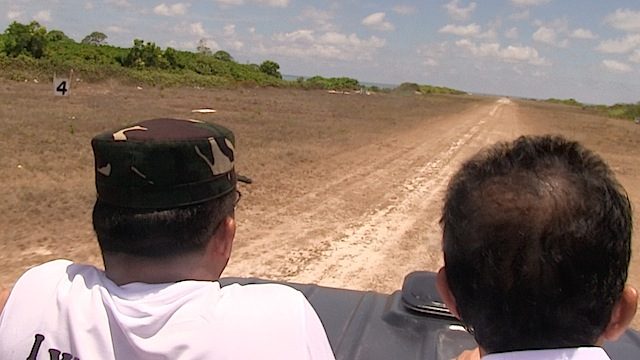 Still no plan to fix runway in West PH Sea Residents of Pag-Asa: Life on a disputed island

The lawmakers were supposed to hold a congressional hearing on a proposal to establish the Spratlys Development Authority, a government body that will focus planning projects in maritimes territores that are under the control of the Philippine military.

Kabayan Representative Harry Roque, the proponent of the measure, said holding the hearing in Pag-Asa “would have been evidence of title,” he told Rappler in a text message.

Pag-Asa Island is the 2nd biggest island in the South China Sea and the only one occupied by civilians. The island is part of the Kalayaan Group of Island (Spratlys) that the Philippines has attached to Palawan province.

It hosts a community of about a hundred Filipinos who receive monthly supplies from the provincial government. (READ: Residents of Pag-Asa: Life on a disputed island)

The lawmakers instead held the congressional hearing in Puerto Princesa City in mainland Palawan. Roque said the local government unit presented their development plan for the Spratlys.

“We mentioned priority projects including improving the runway in Pag-asa,” said Roque.

The military said the lawmakers may visit the island when the weather improves.

Wescom was also supposed to celebrate its anniversary there on Thursday. The event to be attended by Defense Secretary Delfin Lorenzana and AFP chief General Eduardo Año was also moved to the Wescom headquarts in mainland Palawan. – Rappler.com