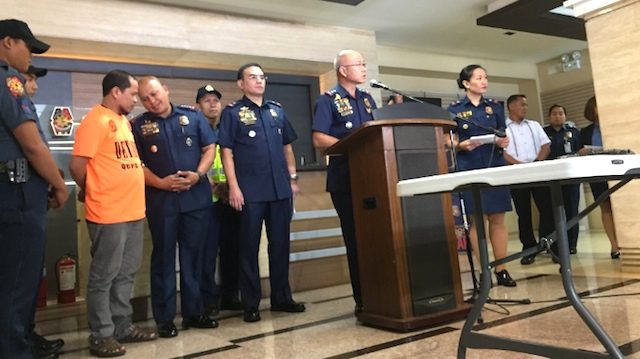 Speaking at a press conference, PNP chief Director General Ronald dela Rosa said police from the National Capital Region Police Office (NCRPO) were able to intercept an improvised explosive device (IED) that would have been used for a terror attack.

“We are yet to uncover the circumstances surrounding this incident involving the Lanao-based Maute Group, but this discovery leads us to believe that the Maute Group has already established a presence in Metro Manila. As to what extent, that is the subject of our follow-up investigation and operations,” said Dela Rosa.

Dela Rosa said he does not want the public to panic but urged Metro Manila residents to be “vigilant.”

“I therefore urge our people to remain calm yet alert and vigilant of the presence of threat groups in our midst,” he said.

Ibrahim has been living in Culiat since 1992.

He also allegedly served as the driver of the vehicle used to transport the suspects, one of them Nasip’s uncle.

Ibrahim was arrested the evening of Monday, March 20, when police and the military were trying to serve a search warrant against a certain Jamil Baja Tawil for illegal possession of firearms. Tawil, according to the Quezon City Police District, was a “suspected ally” of the Maute Group and was living in Ibrahim’s home.

Police were not able to find Tawil but supposedly saw a .45 caliber pistol “in plain view under Nasip’s table.”

Following a search of Ibrahim’s store, police found a 9mm machine pistol, an IED inside a black sling bag with a detonation system, another .45 caliber pistol, and 7 heat-sealed plastic sachets of the illegal drug shabu (methampetamine).