MANILA, Philippines – By a vote of 38-10, the House justice committee on Tuesday, February 21, found probable cause to impeach Supreme Court (SC) Associate Justice Mariano del Castillo, and possibly pave the way for the 2nd impeachment trial of an SC magistrate this year.

The determination of probable cause will send the Del Castillo impeachment complaint for voting at the House plenary. To send the complaint to the Senate for trial, at least 95 votes are needed.

The crucial vote by the House of Representatives’ justice committee concerns accusations of betrayal of public trust against Del Castillo for allegedly plagiarizing at least 3 foreign experts in a landmark case on Filipino comfort women.

The vote now means that facts and circumstances surrounding the case “lead a reasonably discreet and prudent man to believe that the offense charged in the Information or any offense included therein has been committed by the person sought to be arrested,” based on a traditional definition cited in a 2010 SC decision.

“In determining probable cause, the average man weighs the facts and circumstances without resorting to the calibrations of the rules of evidence of which he has no technical knowledge. He relies on common sense,” explained retired SC Associate Justice Antonio Nachura in that definition.

“A finding of probable cause needs only to rest on evidence showing that, more likely than not, a crime has been committed and that it was committed by the accused,” Nachura added.

Unlike the impeachment complaint against Chief Justice Renato Corona, Del Castillo’s impeachment is taking the longer track by passing through the justice committee. The complaint against Corona, in contrast, went straight to the Senate for trial after getting the required signatures of one-third of all House members before it was filed.

The 1987 Constitution allows both tracks.

Del Castillo is on sick leave due to a heart ailment. But he was still able to vote on a recent High Court verdict in relation to the Corona impeachment, when the SC issued a temporary restraining order (TRO) on a subpoena that would have forced a bank to disclose the dollar accounts of the Chief Justice.

Del Castillo voted with the minority, against the issuance of a TRO.

During the hearing, solons debated on whether plagiarism is an impeachable offense, with arguments ranging from the severity of the offense to the probity and integrity needed in an SC justice.

Netizens also joined the discussion on whether plagiarism represents a betrayal of public trust when @rapplerdotcom on Twitter asked them for their thoughts on this.

@AnneTarayKo says, “Whose trust? I think ‘public trust’ is being overused!”

“Coupled with the MISUSE of the plagiarized material to support the opposite conclusion, yes, it’s a betrayal,” said @leyaweya in reply to @rapplerdotcom’s question.

“No more,” said @adriancuenca. “The current (Corona) impeachment (is) taking too much valuable time. The RH and FOI bills are sill lingering.”

“Yes! It should be… because publicly trusted through votes right?” said Twitter user @wangak010.

“Seriously, that’s a given. That is the no. 1 sin ingrained in the mind of every student,” @ChonaChonahm33 meanwhile said.

Last week, the hearing on probable cause took an unexpected turn when a complainant testified that her group, the Malaya Lolas, does not necessarily want the SC magistrate impeached. The group’s leader, Isabelita Vinuya, said the bottom line is for the SC to reconsider their case. 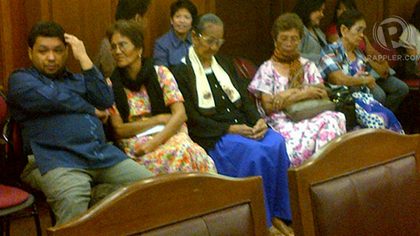 In the controversial decision penned by Del Castillo, the Supreme Court dismissed 70 comfort women’s petition to compel the Philippine government to get a public apology from Tokyo, and to provide reparation to sex abuse victims during World War II.

The complaint is not about the plagiarism per se, but the “act of non-attribution and ‘twisting’ of experts’ decisions,” according to justice committee chair Iloilo Rep Niel Tupas Jr.

Meanwhile, Tupas said the House would ensure that if the plenary impeaches Del Castillo, his impeachment trial would not overlap with that of Corona.

Having pushed for Corona’s impeachment, President Benigno Aquino III has been criticized for his “impeachment rhetoric” that has made him supposedly neglect the country’s other problems. – Rappler.com