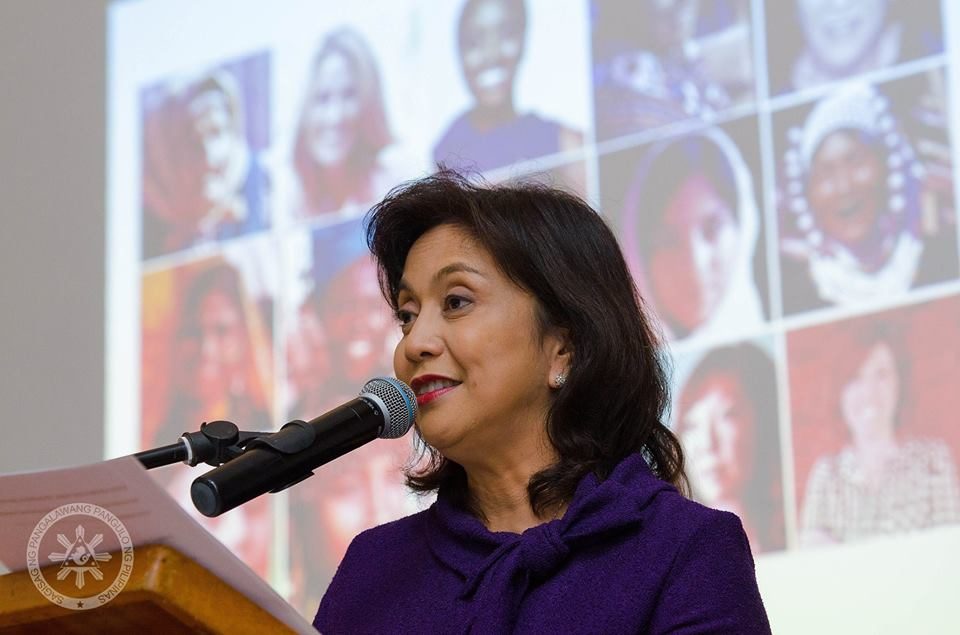 Facebook Twitter Copy URL
Copied
(UPDATED) The SWS poll is held at the height of attacks against Vice President Leni Robredo for her video message criticizing the Duterte administration's drug war, played on the sidelines of a UN meeting

The survey, first published in BusinessWorld, was conducted on 1,200 adults nationwide from March 25 to 28. It has a sampling error margin of ±3%.

Based on the March survey results, more than half or 51% of Filipinos are satisfied with Robredo’s performance, 27% are dissatisfied, and 19% undecided, for a net satisfaction rating of +26.

The SWS uses the following classification:

Robredo’s rating was down by 11 points from her “good” +37 net satisfaction rating in December 2016, when 58% of the respondents said they were satisfied with her performance, 21% were dissatisfied, and 20% undecided.

The survey was held as the Duterte administration and its allies in Congress attacked Robredo over her video message played at a non-governmental organization’s event on the sidelines of the annual meeting of the United Nations Commission on Narcotic Drugs in Vienna, Austria.

In the video, she criticized Duterte’s war on drugs, prompting Speaker Pantaleon Alvarez to threaten her with an impeachment complaint for alleged “betrayal of public trust” because of her criticism of a key government campaign. He also accused her of masterminding the impeachment complaint against Duterte.

Administration officials took turns berating Robredo in public addresses for supposedly putting the Philippines in a bad light – even to the point of supposedly damaging the country’s trade ties with the European Union and Philippine tourism – because of such critical statements. (READ: Tourism chief Teo asks Robredo, media to ‘tone down’ statements on killings)

It also fueled the bid of Duterte supporters to seek her ouster, which culminated in the so-called “Palit-Bise (Change the Vice President)” rally on  April 2, even after Duterte himself had publicly announced that he would not allow Robredo to be impeached.

The Duterte administration’s drug war has been linked to the deaths of over 7,000 people in both legitimate police operations and vigilante-style or unexplained killings. Prior to Robredo’s video message, the campaign had drawn criticism from foreign governments and international and local human rights watchdogs. (READ: Cops are paid to kill in PH war vs drugs – Amnesty Int’l)

The SWS survey period also covered the interaction between Robredo and Duterte at the Philippine National Police Academy commencement exercises on March 24, where the two officials were seen seated together on stage, and having a friendly chat. (READ: After ouster plot claims, Duterte, Robredo share PNPA stage)

During that meeting, Duterte invited Robredo and her family to dinner at Malacañang, which the Vice President agreed to. The dinner has yet to be scheduled but Robredo had said that it is expected to happen after Holy Week.

Sereno’s net satisfaction rating, though two points lower, remained at a “moderate” +14 from +16.

Alvarez saw a slight increase in his ratings at +12 from +10, both considered “moderate.”

For Robredo’s allies in the Senate, the decline in her numbers was “expected” amid the attacks against her.

“It is expected that there will be drops as well as increases in her satisfaction ratings. The 11-point-drop means that a segment of the population may not be in agreement with a number of positions she has taken but that is expected as well,” Liberal Party (LP) president Senator Francis Pangilinan said in a text message.

While there is a steep decline, Senator Paolo Benigno Aquino IV said the majority of Filipinos still support Robredo.

“This was expected with all the black propaganda against her, but it only affected a smaller percentage of the respondents, as the majority are still supportive of the Vice President,” Aquino said.‬

“To rebound, her office needs to continue pushing her agenda of uplifting the lives of our marginalized countrymen. And find a way to ensure that that message of hope and solidarity is louder than the mudslinging done by her detractors,” he added.‬ – Patty Pasion, with a report from Camille Elemia / Rappler.com