Accountability over DAP: What’s happening with the probe? 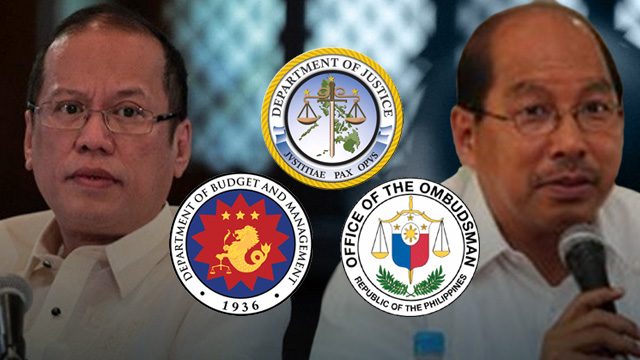 Facebook Twitter Copy URL
Copied
'We have not seen the end of this,' Budget Secretary Diokno says

MANILA, Philippines – Former president Benigno Aquino III’s deadline to submit his comment on the graft case against him over the Disbursement Acceleration Program (DAP) is anytime this week, after Ombudsman Conchita Carpio Morales gave him 15 days to answer a motion for his indictment.

Morales already cleared Aquino of all criminal and administrative charges over DAP, but complainant Bayan Muna filed a motion for reconsideration that went as far as accusing Morales of “attempting to shield” the former president.

In an interview with CNN Philippines’ The Source on Monday, April 24, Morales said she will stick to evidence.

The feisty Ombudsman said she does not owe Aquino anything, that would taint her partiality in her task of prosecuting the DAP case. She was appointed Ombudsman in 2011 by Aquino.

“Excuse me, I did not ask for the position, in fact I was hesitant to accept the position. I wanted the luxury of retirement, pero nauto ako (I was sweet talked). Of course I was challenged,” Morales said.

Morales’ resolution zeroes in on National Budget Circular (NBC) no. 541, a document signed by Abad which directed the withdrawal of unobligated allotments.

While Morales’ resolution explained the dismissal of graft and malversation complaints, and Abad’s possible crime in signing the circular, it does not comprehensively explain why Aquino was not indicted along with Abad for usurpation of legislative power.

Bayan Muna said there are other documents aside from the circular that would clearly implicate the former president. “Such document could not have been issued by Abad without the other DAP issuances preceding it… these DAP issuances bear the signature and approval of Aquino,” Bayan Muna said in their motion. (READ: TIMELINE: The rise and fall of DAP)

Apart from the Office of the Ombudsman, at least two other departments are carrying out their own inquiries that could unearth more evidence when it comes to DAP.

The Department of Budget and Management (DBM), now headed by Benjamin Diokno who was also once budget secretary under Joseph Estrada, is digging deeper into DAP.

Diokno said that aside from the main issue of who authorized DAP, they are also conducting their own investigation of projects which were funded by the DAP.

“It will be for all projects, including  for Liberal Party members. In the past, there’s been a bias for opposition members  (hence, the allegation of selective justice). This time, our data gathering will be color-blind, regardless of party affiliation,” Diokno told Rappler in a text message.

“But if you look at the list of those who should probably be charged, there’s a long list of Liberal Party members starting with Senators who are sitting in Congress right now, baka ‘yun, even the President. This kind of mess cannot happen without the approval of the President,” Diokno said, referring to Aquino in a separate conference with reporters on April 6.

Diokno added: “These are multi-billion (projects) and nobody goes to jail? That’s incredible. I think somebody should go to jail for DAP. So we have not seen the end of this.”  (READ: Where did DAP funds go?)

Diokno said that they have crucial documents on their plate but that the Ombudsman has not made a formal request yet to see them, or tap them in their investigation.

“At some point we may even make it available in the public domain,” Diokno told Rappler.

The Department of Justice (DOJ) has also jumped in on the case buildup, based on pronouncements made by Justice Secretary Vitaliano Aguirre II.

Aguirre said that as of the moment he has evidence which came from former senatorial candidate Greco Belgica, who was the petitioner in the case that led the Supreme Court (SC) to declare parts of DAP unconstitutional.

(We are collecting the complaint, Greco Belgica is participating. Aquino might possibly be included in the DAP complaint. The Ombudsman’s clearance is preliminary, you could always re-file it if there is new evidence.)

Duterte has already warned of his administration’s actions against DAP and all officials involved.

(And PNoy? Despite a constitutional ruling that DAP is prohibited, they continued to do it as if it was nobody’s business.Now I want to expose all of that. All. Even Trillanes, all, I will expose their DAP. How much did they receive? How did they spend the funds?) – Rappler.com