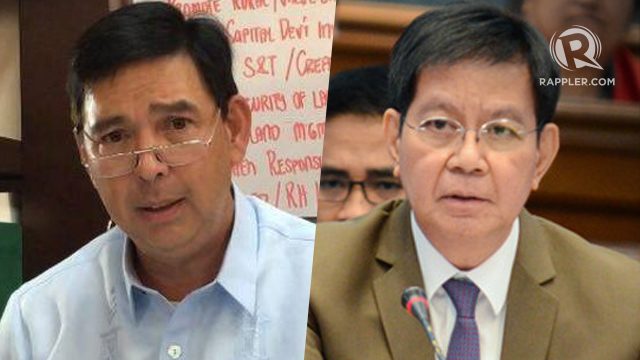 MANILA, Philippines (2nd UPDATE) – Senators from the majoriy bloc sneered at the timing of the complaint against President Rodrigo Duterte before the International Criminal Court (ICC), saying it will not prosper.

“I don’t think much of it. [It] will be difficult to prosper,” Recto said.

Lacson said Duterte’s critics would be in for “disappointment,” citing the two basic requirements before elevating the case to the ICC – that Philippine courts are unwilling or unable to prosecute those being charged, and when the United Nations Security Council or individual states refer the case to the ICC.

“I would like to believe that it is going to be a tall order, even a disappointment for people who wish that the ICC take jurisdiction over [Duterte] and other individuals charged in this instant case,” he said.

“Based on my own personal assessment though, as the presiding chairman of the Senate investigation that heard Lascañas’ and Matobato’s testimonies, if they are Atty Sabio’s main witnesses against [Duterte] et al, or worse, the only witnesses, being both polluted sources and perjured witnesses at that, I am almost certain that the complaint is as good as without merit. Therefore, it’s dustbin-bound,” he said.

Lacson co-chaired the Senate probe into the claims of Matobato and also headed the one-day inquiry into the testimonies of Lascañas, who previously flip-flopped on his statements against the President. (READ: Lascañas tells Senate he was forced to lie last year)

On Monday, April 25, lawyer Jude Josue Sabio filed a complaint against the President and 11 other individuals over the killings of drug suspects in the Philippines.

Sotto, a Duterte ally, said it is “obvious” that Duterte’s “enemies” want to smear his international image.

The Philippines is set to host the Association of Southeast Asian Nations (ASEAN) Summit and Related Meetings in Manila this week.

“Obvious! The enemies of the President are so despondent about his foreign relations successes in the ASEAN,” Sotto said in a message on Tuesday.

“He is so admired in the ASEAN region that they are trying to smear his image. The reason is because ASEAN leaders are also against illegal drugs while [the] EU (European Union) leaders are not. Just like his detractors,” he added.

On the complaint, Sotto said: “At least it will be a dictionary-changer. Humanity will now be defined as drug pushers fighting back against police [operations].”

Senator Joseph Victor Ejercito said the filing of the case was meant to “embarrass” Duterte and was part of the “conspiracy to oust” him.

“Timing in filing of case against President Duterte in ICC is obviously meant to embarass the President in the upcoming ASEAN,” Ejercito said in a text message.

“Still part of a conspiracy to oust the President by destroying his credibility in the international community,” he added.

The sentiments of Sotto and Ejercito echoed the views of Malacañang that the case was meant to “embarrass and shame” Duterte.

But for Senators Antonio Trillanes IV and Leila de Lima, two of the fiercest critics of Duterte, the complaint is a welcome move.

“[It] is a welcome development. We would now have a truly independent body that could find out the whole truth behind the slaughter of thousands of Filipinos and prosecute those behind it to include the enablers who allowed or encouraged it to happen,” Trillanes said in a text message.

“Far from what others claim, the complaint is not black propaganda or a political ploy to oust the President. Instead, it is a formal complaint lodged before the ICC because the Filipino people have already been alarmed, to say the least, about the continued daily killings in the Philippines. It is about making our elected officials accountable for the horrific crimes being committed before the eyes of the Filipino people and the world,” De Lima said.

De Lima maintained the complaint is “solidly based on verified and verifiable documentary and testimonial evidence” on the involvement of Duterte and his officials in the killings.

Nograles and Belaro are part of the majority bloc in the House allied with Duterte, while Roque is a member of the minority.

Nograles said the complaint is the “latest step in the destabilization plot against the Duterte administration” and alleged that the President’s critics are “forum-shopping for a court sympathetic to their complaint.”

For Belaro, the ICC complaint is “premature” and indicates the lack of trust of Duterte’s critics in the Philippine judicial system.

The ICC was intended to complement, not replace, national courts in ending the gravest crimes against the international community. I maintain that while I fully support the fight against impunity, I do not believe that engaging the ICC is appropriate,” said Roque. – Rappler.com