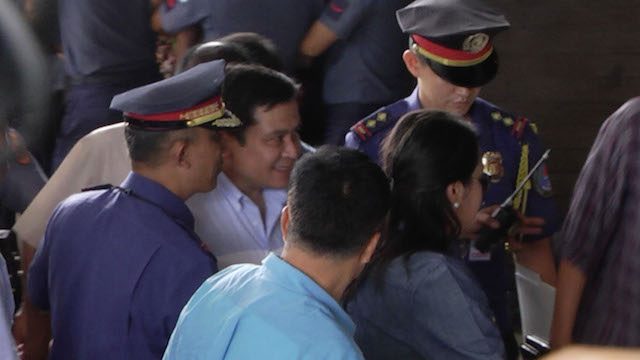 MANILA, Philippines – The Supreme Court on Tuesday, April 25, denied “with finality” the motion for reconsideration filed by former senator Jinggoy Estrada in relation to his plunder trial over a multibillion-peso pork barrel scam.

The High Court said he did not raise “any new and substantive arguments to merit a reconsideration” of its earlier January 24 resolution.

In that resolution, the High Court denied the petition for certiorari and prohibition filed by Estrada, after finding that the anti-graft court Sandiganbayan did not commit any grave abuse of discretion when it allowed the presentation of disbursement reports and the testimony of whistle-blower Benhur Luy.

Luy is a former employee of Janet Lim-Napoles, the alleged mastermind of the Priority Development Assistance Fund (PDAF) scam, who is now serving her life sentence at the Correctional Institution for Women in Mandaluyong City. Solicitor General Jose Calida has recommended her acquittal.

Employed by Napoles’ JLN Group of Companies, Luy had testified that she and her brother Reynaldo Lim had detained him in two places to prevent him from revealing to authorities what he knew. He had access to reports that show how Napoles used fake non-governmental organizations to get billions of pesos of pork-barrel funds from dozens of lawmakers – like Estrada – for non-existent projects.

Estrada faces a full-blown trial starting June 19 in connection with the P183-million in alleged kickbacks he got from the misuse of his PDAF. – Rappler.com