61% of Filipinos approve of death penalty for drug convicts MANILA, Philippines – A majority of Filipinos are supportive of the measure seeking to reimpose the death penalty for 7 drug offenses, a survey by the Social Weather Stations (SWS) revealed.

According to the First Quarter 2017 Social Weather Survey released on Tuesday, April 25, 61% of Filipinos gave their nod to the controversial House Bill (HB) Number 4727, which gives judges the option to punish drug convicts with either life imprisonment or death.

The survey was conducted through face-to-face interviews with 1,200 adults nationwide from March 25 to 28, roughly two weeks after 217 lawmakers approved the death penalty measure on 3rd and final reading.

Part 1: What happened behind closed doors to the death penalty bill?

Part 2: When the House whips go to work for the death penalty

Part 3: When politics and principle clash on the death penalty

Respondents were asked the question: “Do you approve or disapprove of the proposed law that will reimpose the death penalty on heinous crimes pertaining to illegal drugs?” “This gives a net approval score of +38 (61% strongly/somewhat approve minus 23% somewhat/strongly disapprove), classified by SWS as good,” said the polling firm.

The same survey also showed that only 13% of Filipinos have “extensive” knowledge about the bill, while 35% said they have “partial but sufficient” knowledge. Another 43% of Filipinos said they only know “a little” about HB 4727, while 10% said they know “almost nothing or nothing” at all.

The approval rating was also higher for those who have knowledge about the measure. HB 4727 is one of the priority measures of President Rodrigo Duterte, who counts more than 267 lawmakers as his allies.

While the bill already breezed through the lower chamber, it is expected to be challenged at the Senate.

Senate Minority Leader Franklin Drilon said on Wednesday, April 26, that at least 13 senators are expected to vote against the measure.

According to the survey, Metro Manila respondents know more about the controversial death penalty bill.

Respondents who have either extensive knowledge or partial but sufficient knowledge of HB 4727 were highest in Metro Manila, constituting 51% of the respondents surveyed in the area.

For Balance Luzon, 51% of respondents are knowledgeable about HB 4727, while the figure is at 49% in the Visayas, and 37% in Mindanao.

Meanwhile, those with either only a little knowledge or almost no knowledge about the bill is highest in Mindanao, the home region of Duterte, at 63%. This is followed by the Visayas at 51%, Balance Luzon at 49%, and Metro Manila at 46%. Sixty-five percent of the respondents belonging to Classes ABC said they either have extensive or partial but sufficient knowledge.

Class D, which the SWS described as consisting mostly of the “masa (masses)” registered 49%, while Class E got 35%.

Meanwhile, the number of those with either only a little knowledge or almost no knowledge at all was highest in class E at 65%, followed by class D at 51%, and class ABC at 35%. 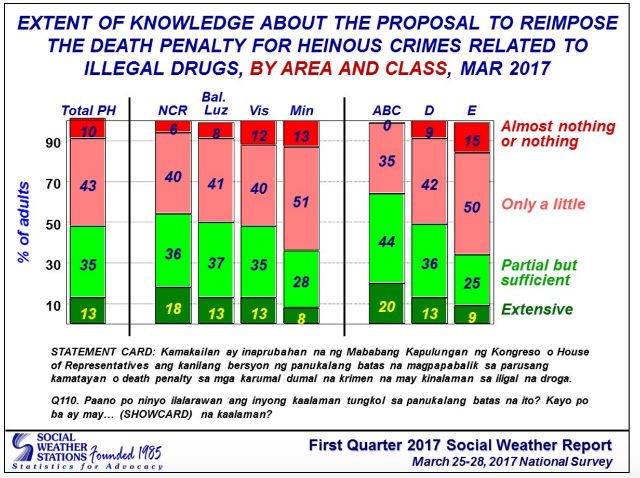