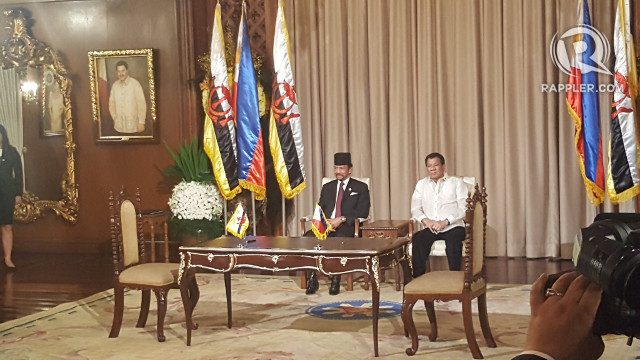 MANILA, Philippines – During his state visit to the Philippines, Brunei Sultan Hassanal Bolkiah said he wants the two countries to collaborate in addressing a common scourge: illegal drugs.

“We also look forward to our future collaboration in addressing issues on drugs,” said Bolkiah in his press statement on Wednesday, April 27.

He delivered it beside President Rodrigo Duterte in Malacañang.

“We believe that both sides will benefit from the exchanges of expertise and best practices in this area,” he added.

Interestingly, Duterte, controversial worldwide for his bloody anti-drug campaign, did not mention drugs even once in his statement.

What Duterte did mention, and which Bolkiah left out, was the need for countries to ensure peace and security in the South China Sea despite disputes.

“As we seek peace, stability and security in the vital waters of South China Sea, we must remember that we have duties as responsible members of the international community which we must abide,” said the Philippine President.

Though Brunei is one of 5 Southeast Asian countries with claims to the South China Sea that overlap with China’s expansive claim, Brunei is known to be a “silent” claimant.

Duterte emphasized the need to finish the framework on a code of conduct in the South China Sea.

Both he and Bolkiah, however, mentioned the Mindanao peace process.

Along with Malaysia, Brunei sends soldiers to Mindanao to help monitor the government’s ceasefire with the Moro Islamic Liberation Front.

“Our defense links are closer than ever through our participation in the International Monitoring Team in southern Philippines. The ongoing peace initiative will promise a prosperous future for your people and have a far-reaching impact upon our region,” said Bolkiah.

He and Duterte also share a desire for more integration and connectivity in the subregion they belong to – BIMP-EAGA.

“We also look forward to further opportunities for closer cooperation under the BIMP-EAGA. As envisioned for 2025, it is important for us to develop a resilient and competitive sub-region,” said the Sultan.

The two heads of government witnessed the signing of an agreement on cultural cooperation and a memorandum of understanding on the development of halal products.

The agreement on cultural cooperation, signed on the Philippine side by National Commission on Culture and the Arts chairman Virgilio Almario, aims to promote knwoledge of visual, musical, and performing arts, literature and cultural activities.

The MOU on halal products provides a framework for cooperation to develop the Philippines’ and Brunei’s halal industry, products, and services through investments, sharing of products, technology, and best practices. – Rappler.com