Enrile loses another round in Sandiganbayan plunder case 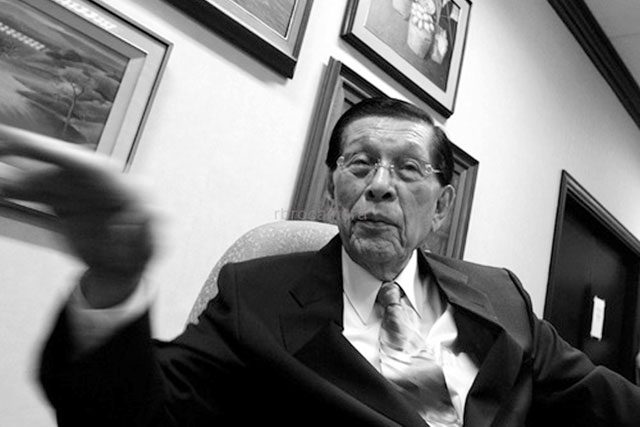 MANILA, Philippines – Former Senator Juan Ponce Enrile took another setback in his P172-million plunder case as the anti-graft court Sandiganbayan again denied his motion to dismiss the charges against him.

In a resolution promulgated on Thursday, April 27, the court’s special third division denied Enrile’s motion for reconsideration, appealing the court’s decision in January to push the case forward.

In the 19-page resolution penned by division chair and Presiding Justice Amparo Cabotaje-Tang, the court said Enrile was not able to present a new argument that would merit the reversal of their earlier decision.

This will again trigger the pre-trial proceedings halted by Enrile’s many legal remedies.

Enrile was charged nearly 3 years ago with former senators Jinggoy Estrada and Bong Revilla. Revilla and Estrada’s cases have been scheduled for trial, while Enrile’s remains stuck at the pre-trial level. This is due to the legal maneuvers of his camp, led by veteran litigator Estelito Mendoza, which reached the Supreme Court twice.

The first involved asking for a bill of particulars, and the second sought the right to bail. In both petitions, they succeeded.

Mendoza has also taken on Revilla as his client, so far managing 5 postponements of the former senator’s trial schedule. (READ: Estelito Mendoza and his 2017 comeback in plunder cases)

In Enrile’s motion, he repeated the meat of the arguments he raised before: that the information charged against him lacked the details required by the Supreme Court (SC) when they granted his petition for a bill of particulars. (READ: How the bright Enrile is fighting his plunder charges in court)

According to the Sandiganbayan, that Enrile asked for a bill of particulars in the first place is already an admission of sufficient charges, except that it lacked details.

Enrile had wanted specifics in the information, including dates, amounts, and other details in projects he supposedly earned from. Enrile also allegedly earned P172 million in kickbacks from businesswoman Janet Lim-Napoles who operated an intricate scheme now known as the pork barrel scam.

The court said the information needs to only establish fundamental elements, but that what Enrile wants are “matters of evidence that do not need to be alleged” at this stage. Nevertheless, said the court, the information has sufficiently established the elements crucial to charge someone for plunder.

In his motion for reconsideration, Enrile highlighted the principle of “unjust enrichment” or increasing your wealth at the expense of others through unlawful means. Enrile claimed that the lack of details in the information fails to prove that he unjustly enriched himself.

“Simply put, the particular overt acts alleged to constitute the combination or series required by the crime of plunder, coupled with a specification of the other non-evidentiary details stated above, already answer the question of how Enrile took undue advantage of his position, authority, relationships, connections and influence as Senator to unjustly enrich himself,” the court’s resolution said.

The Sandiganbayan also used against Enrile the SC’s decision which favored his request for a bill of particulars.

“The Supreme Court already declared that there is no need to provide details on the alleged predicate act of ‘unjust enrichment’ in the said Enrile case. How accused Enrile, who is the petitioner in that case, could miss this point baffles the Court,” the resolution said.

Justices Cabotaje-Tang, Sarah Jane Fernandez, and Zaldy Trespeses concluded: “In sum, the court finds that the accused Enrile has failed to present any sound reason for the court to overturn its resolution promulgated on January 31, 2017.” – Rappler.com