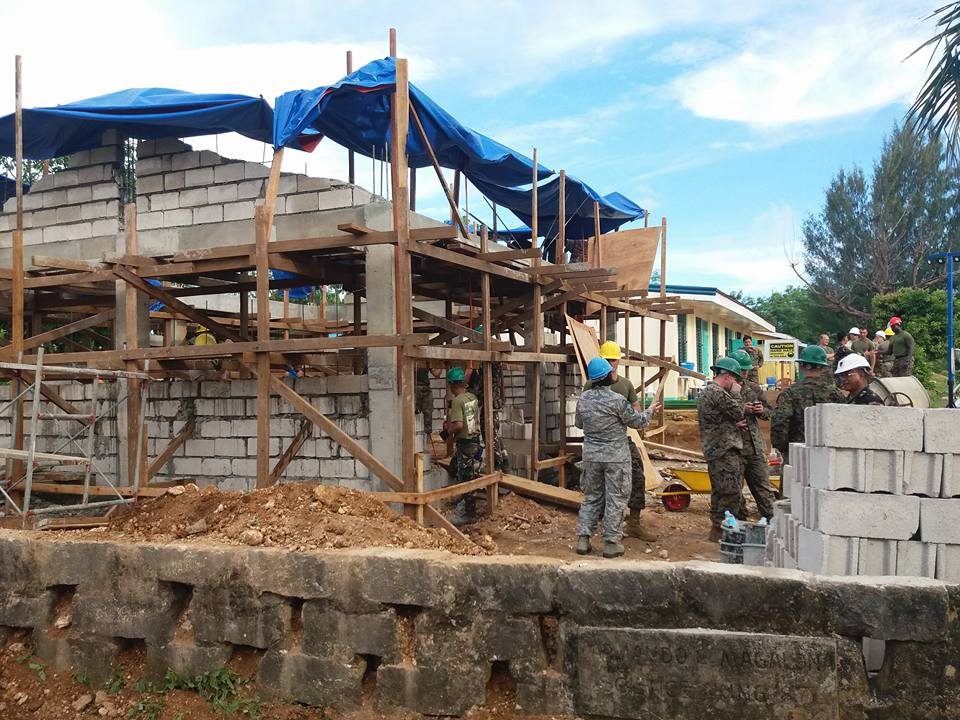 Facebook Twitter Copy URL
Copied
The school building, which doubles as an evacuation center, is among the community infrastructure projects being undertaken by Philippine and US soldiers in line with the 33rd Balikatan

EASTERN SAMAR, Philippines –  Residents of Surok village in Guiuan town are looking forward to a new school building that will also provide safe shelter for them in times of disaster.

The construction of the two-classroom school building is under the Humanitarian Assistance Program of the 33rd Balikatan (Balikatan 33-2017), the annual Philippines-US military exercises.

US military engineers, with members of the Philippine Army, are building the classrooms, which also serves as an evacuation center, said Guiuan Mayor Christopher Sheen Gonzales.

“We do have so many reasons to be thankful to the US Armed Forces here and the Philippine Army. The school project in barangay Surok  is more than just providing better learning environment for our students here but rather ensuring the safety of the children and the community itself in times of disasters,” he said. Surok village chief Gloria Ecleo said: “The education of our children here is the only thing we have. And today was different because we knew that somebody thought we were that important.”

“We are so grateful for this project this will be of great help to us here in our village and this will really improve the lives of our children and also those from nearby villages,” Ecleo added.

First Lieutenant Martin Meehan, commanding officer of the US Marines Engineering, Alpha Company, told Rappler that  the project is part of the humanitarian component of Balikatan 33-2017, to help restore the village’s structure that was destroyed by Yolanda.

Meehan praised the members of the US Marines and the Philippine Army who are part of the project, saying they will learn from each other and improve interoperability among the two countries’ militaries for better cooperation when future disaster strikes.

The first Balikatan under the Duterte administration will focus on humanitarian assistance and disaster response and counter-terrorism.

The Guiuan schoolbuilding project is among the community infrastructure projects in Panay, Leyte, and Samar being undertaken by Philippine and US soldiers ahead of the Balikatan from May 8 to 19. – Rappler.com