UP chancellor worried over ‘collateral damage’ in drug war 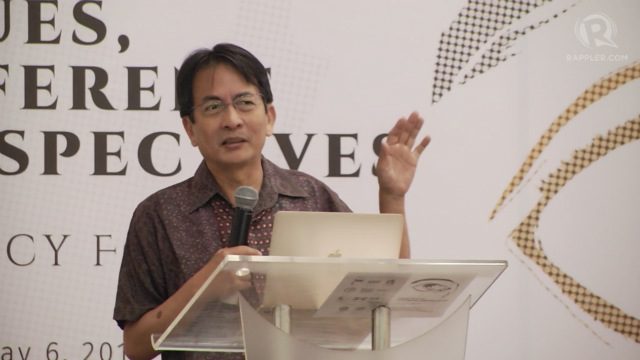 MANILA, Philippines – As the chancellor of the University of the Philippines in Diliman, a 500-hectare area spanning 8 barangays in Quezon City, Dr Michael Tan could not help but worry that members of the Diliman community may end up as “collateral damage” in the government’s drug war.

Tan expressed his concerns about the government campaign at a conference on drug policies here and abroad hosted by the university and the Free Legal Assistance Group (FLAG), among other organizations, on Friday, May 5.

Aside from students, faculty members, and unversity staff, Tan said UP Diliman also hosts  “communities that grapple with the issues of drug wars and TokHang…now sometimes known as TokBang,” referring to the death of drug suspects in police anti-drug operations.

He revealed that UP Diliman has been witness to apparent summary executions since the campaign against illegal drugs began.

“We have had at least 6 executions within UP Diliman attributed to vigilantes since the police and the military are not allowed on campus,” Tan said.

Tan, who lives on campus, said he would wake up in the middle of the night whenever he heard gunshots as he would “worry who was executed.”

“I worry about collateral damage that might involve students. I worry – what if students, staff, or faculty are caught with drugs under the present dispensation with so much arbitrariness, even suspicion of drug use can totally ruin the ‘suspect’s’ life?” he added.

Tan said he did not hesitate to agree to be part of the forum since UP, as an academic institution, is “duty-bound to advance science.”

“What is so disturbing about what is happening today in the Philippines and other parts of the world is that so many of our crucial policies are formulated without science,” he said.

Tan noted the worldwide “March for Science” two weeks ago, held mainly in the US to fight President Donald Trump’s alternative facts. He said that in the Philippines, the “usually placid and apolitical” scientists joined the march organized in Quezon City to “protest the assaults on science.”

“For the Philippines, this could not be more real than in drug policies  where we see the use of programs ands strategies that have been found to be not only useless abut also harmful, with consequences that may affect many future generations,” he said.

Tan stressed that the forum was not an anti-government event, as he noted that UP, as a state university, has the “mandate to serve the nation.”

Through the forum, he said, “we can map out and navigate the perilous waters of drug policies and practices.”

It’s been almost a year President Rodrigo Duterte launched his war on drugs. A crackdown on narcotics was among his main 2016 campaign promises.

While the drug war is popular, it has also been heavily criticized both here and abroad for its high death toll. Over 2,500 deaths have been attributed to police operations while another 1,800 homicides have links to illegal drugs. Police have yet to investigate another 5,000 deaths since July 2016.

International groups, including the United Nations, have called on the Philippine government to shift from a “punitive” approach against drugs to one that’s more “human rights-oriented.”

Government officials, the health secretary, and the Dangerous Drugs Board (DDB) chief included, have said that the illegal drugs problem is both a health and peace and order issue. At the same time, however, Duterte has said in his speeches that drug suspects and criminals are not human. – Rappler.com