Nov 28, 2012 4:33 PM PHT
Rappler.com
Facebook Twitter Copy URL
Copied
(UPDATED) The counsel of the Reyes brothers, charged with murder for the Ortega slay, advises them to remain in hiding. The brothers are not yet off the hook, however, says the Ortega family's counsel. 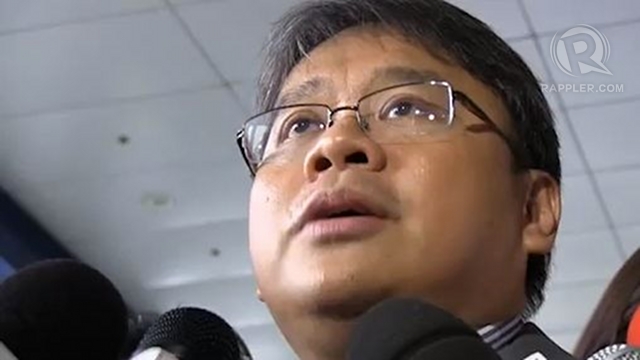 MANILA, Philippines (UPDATED) – A fugitive Philippine politician and his brother accused of murdering an environmental activist will remain in hiding amid public outrage over the case, their lawyer said.

Joel Reyes, former governor of Palawan, and his brother Mario, have been on the run since March when a local court ordered their arrest for the fatal shooting of broadcaster Gerry Ortega in Puerto Princesa City.

The case however suffered a setback Tuesday, November 27, when an appeals court invalidated the findings of the justice department on a technicality, potentially voiding the arrest warrant.

Ortega was gunned down in January of 2011 in a case that rights groups said highlighted the “culture of impunity” in the Southeast Asian country where politicians routinely attack their critics without being punished.

“We would file a motion with the court to get a definitive statement on the lifting of a warrant of arrest against them,” their lawyer Ferdinand Topacio told AFP.

“Until we get that, I would suggest to them not to surface first,” Topacio said. “They are fugitives from injustice.”

Topacio said he had had no contact with his clients since they went underground, and immigration officials have said they may have escaped overseas using fake passports.

But the Reyes brothers are not yet off the hook despite the Court of Appeals’ ruling last Tuesday, the Ortega family’s counsel said.

“The CA ruling is confined only to the technicality of the creation of the 2nd panel of prosecutors that investigated the evidence on the Ortega murder case. The CA did not order the quashing of the arrest warrant and the withdrawal of the information filed before the Regional Trial Court,” lawyer Alex Avisado, lead counsel for the Ortega family, said.

In local radio interviews, Topacio said the CA ruling, “by extension of logic” in effect rendered invalid the filing of information for murder against most of the suspects currently being tried before the sala of RTC Judge Angelo Arizal in Puerto Princesa.

“Mahabang usapin pa ito, although we anticipate that the lawyers of the Reyeses will file another motion to quash the warrant based on the CA ruling,” Avisado said.

He indicated that the Ortega family’s lawyers will oppose the bid of the Reyeses to capitalize on the CA ruling and ask Judge Arizala to dismiss the complaints and discontinue the ongoing trial.

“Expect either side to fight on until we reach the Supreme Court,” Avisado said.

He added that the arrest warrants for the Reyes brothers and the P2-M each in rewards for their capture are still in effect.

Avisado pointed out that in the case of Sen Panfilo Lacson who went into hiding after he was implicated in the Daquer-Orbito murder case, the CA ruled in his favor and directly ordered the withdrawal of the arrest warrant.

“In the case of the CA decision on the motion filed by Mayor Mario Reyes, the CA merely ruled on a technicality involvinig the creation of the second DOJ panel to give the DOJ secretary the elbow room to clarify her order,” Avisado said.

Nestor Burgos, chairman of the National Union of Journalists of the Philippines, said the government’s failure to arrest the high-profile fugitives showed powerful politicians remained untouchable.

“This is a complete mockery of justice,” Burgos told AFP. “This shows to the public that these people who have power, money and are influential can get away with murder, literally.”

Ortega, a veterinarian known widely as “Doc Gerry,” was shot dead in a clothes shop shortly after he had just finished his radio show.

He had repeatedly accused Reyes of massive corruption during his time as governor, and was an outspoken critic of mining activities that he said damaged pristine Palawan.

The gunman was immediately arrested and ownership of the weapon was traced to a close Reyes aide.

Another suspect who had turned state witness also implicated the brothers in the plot.

Despite the strong evidence however, prosecutors initially cleared the Reyes duo, triggering a public outcry and an intense social-media campaign that forced the justice department to reinvestigate the case.

In March, a new investigation panel from the justice department ruled there was probable cause to charge the two, and a Palawan court subsequently issued an arrest warrant.

On Tuesday, an appeals court invalidated the findings of the justice department on a technicality, potentially voiding the arrest warrant.

“This ruling is a setback, not only to the Ortega case, but also to the other cases of unsolved murders of journalists,” Burgos said. – Agence France-Presse