All past DOJ chiefs upheld deal with BuCor – Tadeco CEO 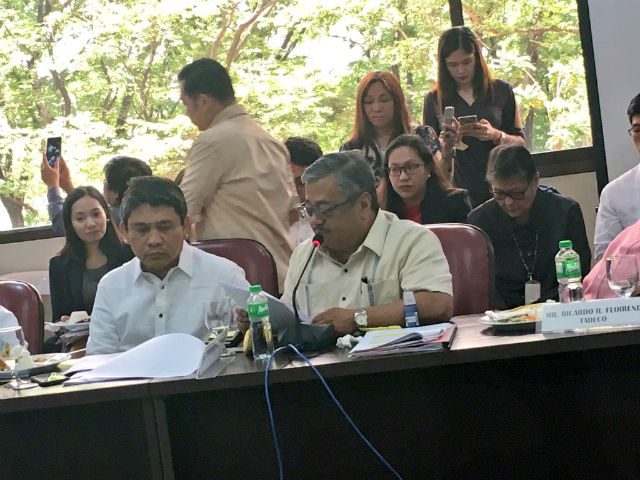 MANILA, Philippines – The Tagum Agricultural Development Corporation (Tadeco) on Tuesday, May 9, defended its joint venture agreement with the Bureau of Corrections (BuCor), saying all past justice chiefs “upheld its validity.”

Tadeco president and CEO Alexander Valoria raised the point before the House committees on good government and public accountability, and justice on the first day of its probe into the decades-old joint venture agreement (JVA) between Tadeco and BuCor.

Valoria noted that since the 1970s, the BuCor-Tadeco deal has been the subject of various probes by the Senate and House committees, and special Department of Justice (DOJ) fact-finding teams. None of them found anything wrong with the joint venture agreement alleged to be unconstitutional.

“Every time there is a new administration or new DOJ secretary or new director at the BuCor, they review or probe is triggered,” Valoria said.

“The various contracts between Tadeco and BuCor have been reviewed and approved by no less than 6 secretaries of justice, namely, Juan Ponce Enrile, Vicente Abad Santos, Ricardo Puno, Catalino Macaraig Jr, Sedfrey Ordoñez, Simeon Datumanong, and Raul Gonzalez. It has also passed through 14 secretaries of justice who upheld its validity,” he added.

This was why, he said, he was “caught by surprise” that Tadeco was now again being probed under the administration of President Rodrigo Duterte.

“And so here we are again facing another probe that honestly caught me by surprise. I thought this would be the one administration where we would not have to undergo another probe,” said Valoria.

The Tadeco chief said the BuCor-Tadeco JVA at the Davao Prison and Penal Farm (DPPF) was “so successful” that the concerned agencies even wanted to do the same in the Iwahig Penal Colony in Puerto Princesa, Palawan, but did not specify when this happened.

“The JVA has been so successful that the BuCor, DOJ – and this is on record – have actually asked Tadeco to replicate this same program in the Iwahig Penal Colony in Palawan,” said Valoria, added that his company even already sent teams to Palawan to survey the area.

The JVA also states that BuCor must receive profit shares with respect to the leased lands where the bananas are planted.  In turn, DPPF inmates work in the banana plantation as part of BuCor’s rehabilitation program.

Tadeco is owned by the family of Davao del Norte 2nd District Representative Antonio Floirendo Jr, who is now embroiled in a feud with Speaker Pantaleon Alvarez. (READ: Graft complaint vs Floirendo not about feuding girlfriends – Alvarez)

Floirendo, a member of the justice committee, inhibited from the hearing.

Alvarez had filed a resolution calling for a probe into the deal, claiming that the government was losing as much as P106,167,191 a year from the contract.

“We emphasize that Tadeco paid to BuCor not only the guaranteed annual production and profit share, but also the inmates’ farm training support, the stipend and support program, the training subsidy,” said Valoria.

He added that Tadeco even shelled out P2.8 billion in wages, benefits, and incentives to its employees.

“The core purpose of the JVA between BuCor and Tadeco is the rehabilitation of the inmates of the DPPF, giving them agricultural and industrial training plus gainful employment, thereby providing them with the skills that will enable them to eventually integrate back into society as productive and responsible citizens,” Valoria said.

He said that as provided by the contract, Tadeco paid the government  P438.179 million in taxes and fees in 2016.

“I challenge you to find an agricultural operation that provides these level of benefits to the country,” the Tadeco chief said.

The provision he stated refers to alienable and disposable lands in the public domain. The land of the BuCor is a government reservation and is therefore inalienable public land. As such, it cannot be subject to occupation, entry sale, lease, or other disposition, said Valoria.

He argued that the contract is a JVA, and not a lease like what Tadeco’s critics are insisting.

In his House resolution, Alvarez also claimed that Tadeco sells bananas at $12 per box, but Valoria disputed this.

“Our answer, your honor, is how we wish that were true. Unfortunately, that is not the truth. Otherwise, all the growers will be driving Mercedez Benz rather than being on the dire straits they find themselves in,” said Valoria.

He then invited the lawmakers to visit Davao so they can see for themselves Tadeco’s operations at the DPPF.

Calida, the Department of Justice, and the Commission on Audit have released separate findings that the BuCor-Tadeco deal is unconstitutional and must be voided.

During the hearing, Justice Secretary Vitaliano Aguirre II said the “best and fastest” way to cancel the JVA will be through a proclamation issued by President Rodrigo Duterte. – Rappler.com