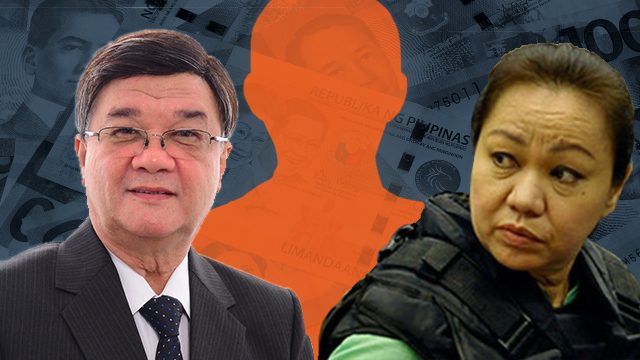 MANILA, Philippines – When the Department of Justice (DOJ) reopens the investigation into the pork barrel scam, it will have its eye on the “instigator” of the whole scheme that uses fake non-governmental organizations (NGOs) to earn from lawmakers’ discretionary funds.

Alluding to former budget secretary Florencio “Butch” Abad, Justice Secretary Vitaliano Aguirre II on Thursday, May 11, suggested there is a possibility that Napoles may not be the most guilty in the whole scheme.

“The one who instigated to commit the crime is more guilty than the principal. If you’re the public official, and you influenced or instigated Mr B to commit plunder, the instigator is the more guilty,” Aguirre said in Filipino.

“‘Di ba may nagsabi diyan na may tutor o may mentor?” Aguirre asked. (Didn’t she say she had a tutor or a mentor?)

Asked who he was referring to, Aguirre laughed and told reporters: “Alam ‘nyo naman ‘yan.” (You already know.)

Napoles once pointed to Abad as the one who taught her how to set up fake NGOs to transact with lawmakers using their PDAF. Abad has no pork barrel scam-related charges.

Aguirre said the possible existence of an instigator could be a determining factor in deciding whether Napoles is qualified to be a state witness.

“It’s simple – you should not appear to be the most guilty and you’re the only one who can provide what’s in your testimony,” he said in Filipino.

Janet Lim Napoles, who owns many of these fake NGOs, has already been charged with plunder along with lawmakers and has since been described as the mastermind of the scam.

(We have a doctrine that for example, they have equal criminal responsibility, one is a public official and the other is a private person, the most or more guilty is the public official.)

Aguirre said their reinvestigation will not adopt the findings of the earlier DOJ panel created by his predecessor, detained Senator Leila de Lima. (READ: FACT CHECK: What can Aguirre’s DOJ do in the Napoles case?)

Aguirre again hit the past administration for its “selective justice,” which he said, spared their allies from accountability.

(We don’t know whether there was still selective justice in the second or third batch promised by De Lima. So definitely, ours will be different, we will not adopt the findings of the De Lima-constituted panel.)

Aguirre said they’re still deciding whether to create a special task force made up only of DOJ officials, or have a joint panel with the National Bureau of Investigation (NBI) as done before.

Lawyer Jose Justiniano, the Ombudsman-deputized prosecutor of the pork cases during De Lima’s time, told Rappler that only the Ombudsman can conduct a preliminary investigation into the pork cases. (READ: Pork Tales: How it began)

“There was a law in 2015 which says that in a corruption case, if the damage to the government is less than P1 million or there was no damage to the government, then it should be with the trial courts (or DOJ as prosecutor), but the law only covers crimes from 2015. So definitely, in the PDAF scam, it would be with the Sandiganbayan (or Ombudsman as prosecutor),” Justiniano said in a phone interview.

The DOJ, he said, can only conduct a fact-finding investigation.

Aguirre reiterated in the press conference that they have concurrent jurisdiction with the Ombudsman. But in an earlier text message to Rappler, Aguirre admitted that their findings will still have to be “transmitted to the Ombudsman.” (READ: After CA acquittal: What’s next for Janet Napoles?)

In a letter sent to Aguirre on May 5, Napoles’ lawyer Stephen David said his client has been getting threats from inside her jail at the Correctional Institute for Women (CIW) in Mandaluyong.

“There were several instances in which her belongings were scattered inside her cell as if looking for something and almost every night she started feeling unease for she felt someone is intently watching her. Not to mention the written threats she is receiving from unknown individuals,” David wrote.

David, though admitting they don’t have proof, also pinned the threats on high-ranking officials.

“The undersigned firmly believes that the threats, although no direct proof can be shown as to who the perpetrators were, come from former and current high-ranking public officials who have the capability and capacity to consummate the threats,” the lawyer wrote.

During Thursday’s press conference, Aguirre even added that there is also a threat on Napoles using her brother Reynald Lim, who’s still at large.

(Her brother has been pawned so Janet won’t talk. That’s why he can’t be caught.)

David said they will make a formal request to anti-graft court Sandiganbayan to transfer Napoles to the NBI custodial center. – Rappler.com