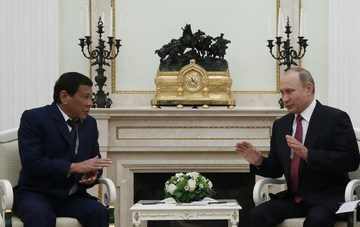 Duterte made the request during his bilateral meeting with the Russian leader in the Kremlin on Tuesday.

“I am sorry if I am in a hurry but I need to buy, if you can grant me a soft loan, we’ll [inaudible] the money and pay it right away because the arms that we ordered from America was cancelled,” he told Putin.

Duterte did not give more details about the US arms deal, but was likely referring to the US sale of guns to the PNP which was questioned by US Senator Benjamin Cardin. The senator had threatened to stop the weapons sale to protest Duterte’s “barbaric actions.”

In early May, Cardin, along with Senator Marco Rubio of Florida, filed the proposed Philippines Human Rights Accountability and Counternarcotics Act of 2017, seeking to restrict the sale of  certain US weapons and equipment to the Philippine National Police because of Duterte’s bloody war on drugs.

Duterte said he needed more firearms to implement his newly declared martial law for the entire island of Mindanao and fight terrorists.

“I’m having problems with the ISIS. I come here to seek help,” said Duterte.

“We have very many promising and interesting areas of cooperation, including on energy machine building, transport and infrastructure. And I think we can cooperate in many different technical spheres,” said Putin.

The Philippine president took the opportunity to assure Putin of his independent foreign policy, particularly one that dovetails with the foreign policy of just one major superpower.

“I have gone out of the ambit of the western influence. Nothing has happened ever since the occupation. I’m referring to the Americans,” said Duterte.

The two leaders were supposed to witness the signing of a defense cooperation deal between their defense ministers on Thursday, May 25, but Duterte had to cut his trip short following the attacks in Marawi.

Foreign Secretary Alan Peter Cayetano will stay behind in Russia to represent Duterte at the signing of the bilateral agreements. – Rappler.com