EU: We won’t beg PH to take our money

May 25, 2017 8:30 PM PHT
Paterno Esmaquel II
Facebook Twitter Copy URL
Copied
The EU says there 'is no lack of other countries' to help if Europe is 'not welcome to provide money' to the Philippines 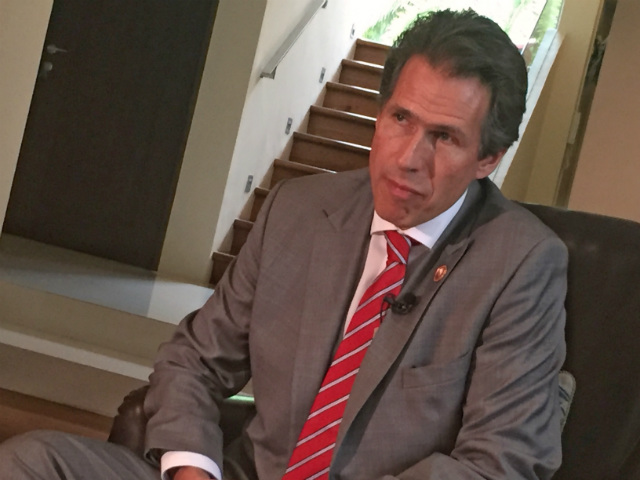 “We do not believe that we have to, in any way, beg, to ask the Philippines, ‘Please, can you take our money?'” visiting EU official Gunnar Wiegand said in an interview at the EU ambassador’s residence Thursday.

“We are willing to continue to cooperate with the Philippines, but we are not asking for this. We are offering,” said Wiegand, managing director for Asia and the Pacific of the European External Action Service (EEAS).

The EU official was reacting to the Philippines’ rejection of 250 million euros or P13.85 billion in new EU grants due to the EU’s alleged interference in local affairs. (READ: PH refuses new EU grants; P13 billion at stake)

Referring to these EU grants, Wiegand added, “This is an offer of Europe that we stay engaged in these fields in which we have an established track record of working well and together with Philippine partners or beneficiaries.”

Wiegand’s office, the EEAS, is the EU’s diplomatic service, and is the counterpart of the Philippine Department of Foreign Affairs.

Wiegand is in the Philippines from May 23 to 25 to attend the Association of Southeast Asian Nations (ASEAN) Regional Forum, and to meet with Philippine officials, including Vice President Leni Robredo and President Rodrigo Duterte’s special envoy to the EU, former Senate President Edgardo Angara.

In Thursday’s interview, the EU official added that the EU’s aid “is not any form of interference.”

Instead, he said this money will allow the EU “to work together” with the Philippines.

“And, therefore, we hope that any misunderstandings can be clarified soon,” Wiegand said.

“But if we are not welcome to provide money, there is no lack of other countries in the region and beyond where the money can be very well used,” the EU official added.

Wiegand, however, pointed out that the Philippines’ reported rejection of EU assistance is not yet final. He said the EU remains “in a constructive dialogue” with the Philippine government about what it meant when it said it is rejecting European aid.

Wiegand said on Thursday, “The last word, I think, has not been said.” – Rappler.com