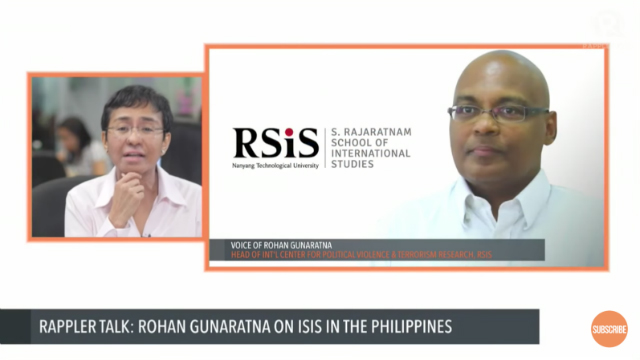 MANILA, Philippines – A leading terror analyst urged the Philippine government to admit Islamic State (ISIS or IS) presence in the Philippines, as the country is now the global terror group’s “epicenter” in Southeast Asia.

“The time for taking the threat seriously has come,” terror analyst Rohan Gunaratna said in a Rappler Talk interview with Maria Ressa on Thursday, May 25.

Gunaratna is the head of the International Center for Political Violence and Terrorism Research in Singapore, and the author of Inside al Qaeda: Global Network of Terror, the definitive text on the growth of Al Qaeda. He is now one of the world’s leading experts on ISIS.

Gunaratna spoke to Rappler after the terrorist Maute Group, which he called the Islamic State Lanao, attacked Marawi City and prompted President Rodrigo Duterte to declare martial law in the whole of Mindanao. (READ: Duterte says martial law due to ISIS threat)

In his Rappler Talk interview, Gunaratna was asked about statements from Filipino officials that Maute Group shouldn’t be called ISIS because “if you call them ISIS, you are helping them, you are buying into their propaganda.”

“They are IS, because they are operating like IS, and they have changed the name,” he said. “So we have to name them by the group they call themselves.”

Gunaratna said it is “wrong to say that there is no IS in the Philippines,” with IS Philippines “already practicing IS-style executions and IS-style operations.”

“Those who are saying that do not understand that for IS to build a presence, Arabs, Iraqis, Syrians do not have to come all the way from Syria or the Middle East to the Philippines. It’s simply that local groups embrace IS ideology and IS methodology,” Gunaratna said.

“If we try to distort and if we say that this is fake news and this is media hype and this is propaganda, and your cities fall to terrorists, your police officers are killed, your religious people are butchered, your sawmill workers are executed, then you are making a mistake. You have to now fight this group,” he added.

The expert contrasted Duterte and his predecessor, former president Benigno Aquino III, toward ISIS presence in the country.

“Unfortunately, the former president always denied that there is IS. Military officers probably at his behest said there’s no IS. At least now President Duterte has accepted there is IS,” Gunaratna said.

Gunaratna said, however, that “even now, if you speak to senior Filipino officials, they are very dismissive that ISIS is operating” in the Philippines.

Gunaratna warned, “IS will use the base in the southern Philippines to mount attacks elsewhere in the region, as well as in the Visayas and in Luzon.”

The analyst earlier told Rappler that during Ramadan, which is the Muslim holy month of fasting, “ISIS is planning to hit Manila and other capitals in the region.”

Ramadan is expected to start on Saturday, May 27.

“The Philippines has just tasted IS on its soil.” – Rappler.com