May 27, 2017 9:41 PM PHT
Paterno Esmaquel II
Facebook Twitter Copy URL
Copied
'If people think that other donors would be without conditions, I would like to see those providers of assistance who have no conditions,' an EU official says 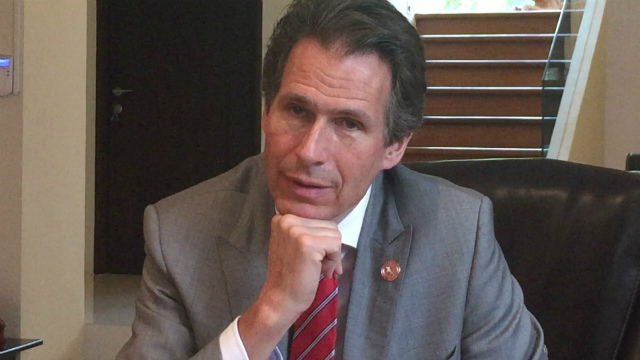 MANILA, Philippines –  The European Union defended its practice of setting conditions in exchange for aid, which the Duterte administration refuses because it is supposedly a way of meddling in local affairs.

Visiting EU official Gunnar Wiegand was asked in an interview on Thursday, May 25, why it is important for international donors to set conditions before giving aid.

“You know why? Because it’s the money of our taxpayers. They want to know where their money goes,” Wiegand said, after the Philippines rejected 250 million euros or P13.85 billion in new EU grants.

Wiegand is managing director for Asia and the Pacific of the European External Action Service (EEAS).

The EEAS is the EU’s diplomatic service, and is the counterpart of the Philippine Department of Foreign Affairs.

Wiegand was in the Philippines from May 23 to 25 to attend the Association of Southeast Asian Nations (ASEAN) Regional Forum, and to meet with Philippine officials, including Vice President Leni Robredo and President Rodrigo Duterte’s special envoy to the EU, former Senate president Edgardo Angara.

During Thursday’s interview, Wiegand was also asked specifically about its conditions before giving aid to the Philippines. One of the EU’s conditions is adherence to the rule of law.

Resting his chin on his fist, the EU official paused before answering this question.

“The question surprises me a little bit,” he pointed out, “as if you wanted to be in a society which has no rule of law.”

Is there aid without conditions?

“And this is nothing special for the Philippines,” he continued. “That is something we apply as a standard for all our assistance programs, and it is something which should be not so difficult to apply with a country which is democratic, which stands for rule of law, and which takes its own commitment for the guarantee of human rights seriously.”

Wiegand was asked a follow-up question: “Is there such a thing as aid without conditions in world affairs, in global politics?”

Wiegand replied: “I don’t know about that. If people think that other donors would be without conditions, I would like to see those providers of assistance who have no conditions.”

“They may have different conditions,” he added.

Wiegand also stressed that the EU will not “beg” the Philippines to accept European aid, as there “is no lack of other countries” for the EU to help, if the Philippines rejects their offer.

Philippine Foreign Secretary Alan Peter Cayetano earlier said that the Philippines has decided to boycott conditional aid from “all countries.”

Cayetano said China and Japan stand out for helping the Philippines “a lot, but without conditions” – even as China is accused of giving the Philippines loans in exchange for Manila’s claim over the West Philippine Sea (South China Sea). – Rappler.com