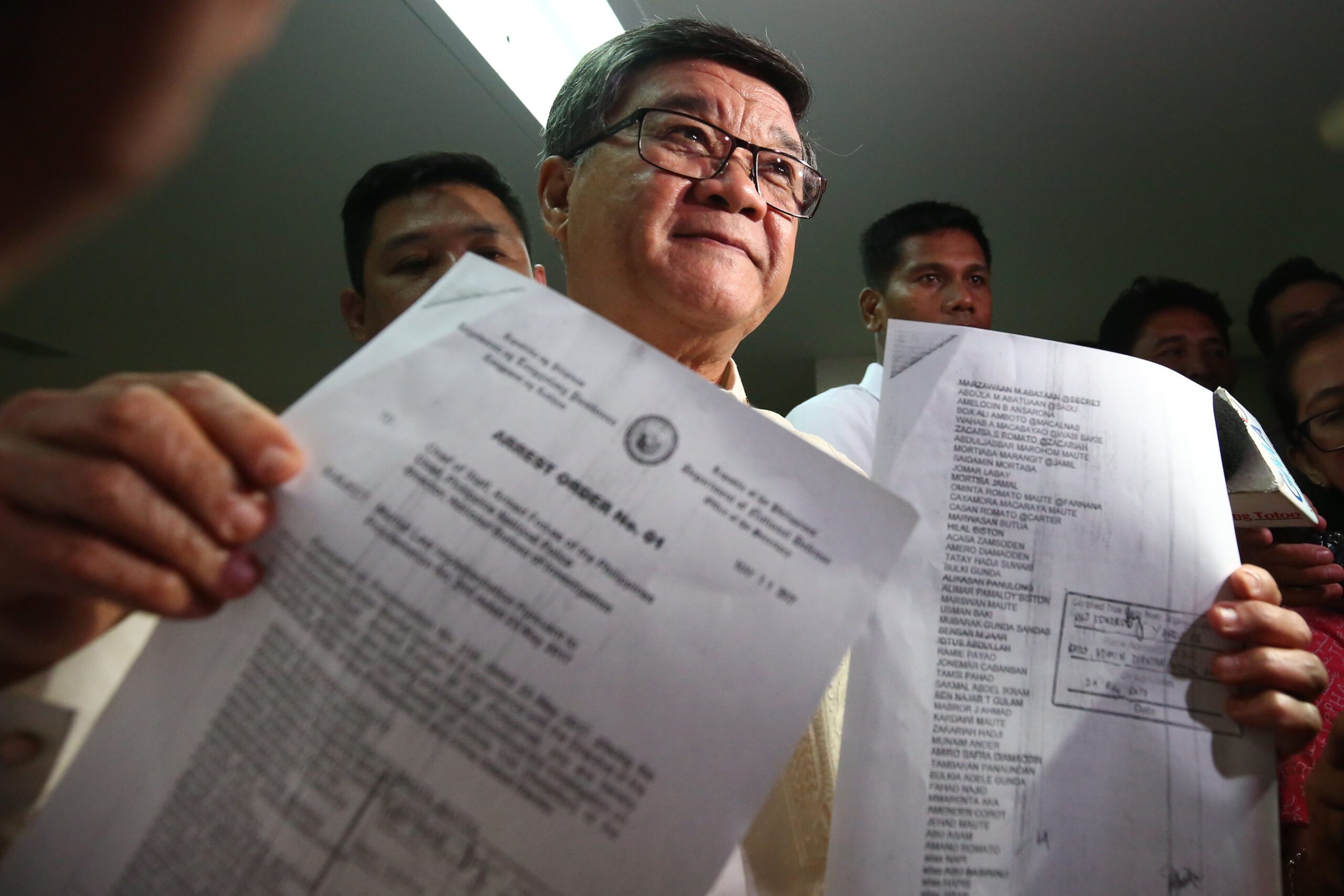 MANILA, Philippines – Defense Secretary Delfin Lorenzana, serving as martial law administrator, ordered the arrest of more than 100 members of the terrorist Maute Group for the crime of rebellion.

Justice Secretary Vitaliano Aguirre II announced this in a press briefing on Wednesday, May 31, and showed a copy of Arrest Order No. 1 issued last Monday, May 29.

This is the first arrest order issued “pursuant to martial law” in Mindanao, which means it is valid even without a court order.

Lorenzana directed the Armed Forces of the Philippines (AFP), Philippine National Police (PNP), and National Bureau of Investigation (NBI) to “arrest, take into custody, [and] conduct/continue [an] investigation” on the Maute terrorists. They are accused of rebellion or violating Article 134 of the Revised Penal Code.

Lorenzana’s arrest order also includes a provision specified in the 1987 Constitution – that every person arrested must be judicially charged within 3 days, otherwise they shall be set free. (LOOK: Palace defends martial law in new social media video)

While martial law is in effect only in Mindanao, Aguirre said Lorenzana’s order is valid nationwide. (READ: ‘Mautes’ from Lanao ‘surrender’ to NBI)

(It means they have determined that these people on the list have committed rebellion in Mindanao, but even though these suspects are no longer in Mindanao and they are found in other parts of the Philippines, they can still be arrested because they have already committed the crime.)

Asked for confirmation, Lorenzana told Rappler in a text message that “even if they committed the crime in Mindanao, they can be arrested even outside Mindanao.”

He added: “Kahit nga walang martial law, puwedeng habulin kahit saan.” (Even without martial law, we can run after them anywhere.)

In explaining why Lorenzana’s order is valid even outside Mindanao, Aguirre also emphasized that rebellion is a “continuing offense.”

There is a legal doctrine which says that because rebellion is a continuing crime, warrantless arrests are allowed. This means that even though there is no martial law in Luzon and the Visayas, a warrantless arrest is still authorized if the crime is rebellion.

Former Supreme Court Associate Justice Consuelo Ynares-Santiago, in her separate opinion in the 2004 Sanlakas case on the Oakwood mutiny, reiterated: “Rebellion has been held to be a continuing crime, and the authorities may resort to warrantless arrests of persons suspected of rebellion, as provided under Section 5, Rule 113 of the Rules of Court. However, this doctrine should be applied to its proper context i.e., relating to subversive armed organizations, such as the New People’s Army, the avowed purpose of which is the armed overthrow of the organized and established government. Only in such instance should rebellion be considered a continuing crime.”

For lawyer Rommel Bagares of the Center for International Law, the order is “superfluous” or unnecessary because “even without a martial law declaration, that power was already available under law to authorities.”

Should people be worried?

Lawyer Oscar Franklin Tan said the legal doctrine regarding rebellion has always been worrisome and a subject of debate in every freshman criminal law class, even outside the current context of martial law.

“Because you can be arrested without warrant anytime if you are deemed related to ‘subversive armed organizations.’ This can be done even without a suspension of the privilege of the writ of habeas corpus,” Tan said. – Rappler.com