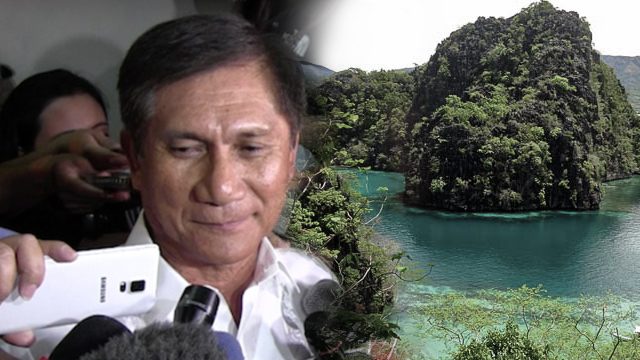 Facebook Twitter Copy URL
Copied
Environment Secretary Roy Cimatu says the inquiry on the proposed plan is to ensure, at the outset, 'that we continue to conserve and protect this last bastion of coastal biodiversity in Palawan'

MANILA, Philippines – Environment Secretary Roy Cimatu on Thursday, June 8, vowed to conduct a “thorough” inquiry into the planned construction of an underwater resort and theme park in Coron, Palawan.

In a statement on Thursday, Cimatu said he has ordered his department’s Biodiversity Management Bureau, Environmental Management Bureau, and Mimaropa office “to undertake an inquiry into this proposed plan, so that at the outset we can ensure that we continue to conserve and protect this last bastion of coastal biodiversity in Palawan.”

Like the municipal government of Coron, Cimatu said the Department of Environment and Natural Resources “at all levels…has not yet received any formal communication” about the planned Nickelodeon theme park.

“We are, however, trying to find out the specifics of this supposed project even as we await the formal receipt of the said proposal,” he added.

The DENR will work on the inquiry with the Palawan Council for Sustainable Development, the Department of Tourism, local government units, and the Tagbanuas “to ensure that ecological, social, economic and human interests are factored in into the project’s evaluation once received.”

Cimatu said the inquiry will be conducted in an “anticipatory and participatory approach.” (READ: Nickelodeon park: Palawan execs say oceans not ‘private’ properties)

“For the record, Coron, which forms part of the Calamianes Group of Islands, is a Key Marine Biodiversity Area of the country, with a high rate of flora and fauna endemism that supports the life of the communities in the area. It is also the ancestral domain of the indigenous people of the Tagbanua tribe,” he said.

Cimatu is more open to discuss the project compared to his predecessor, Gina Lopez, who said she will not allow the planned Nickelodeon theme park as soon as news on the proposal broke in January.