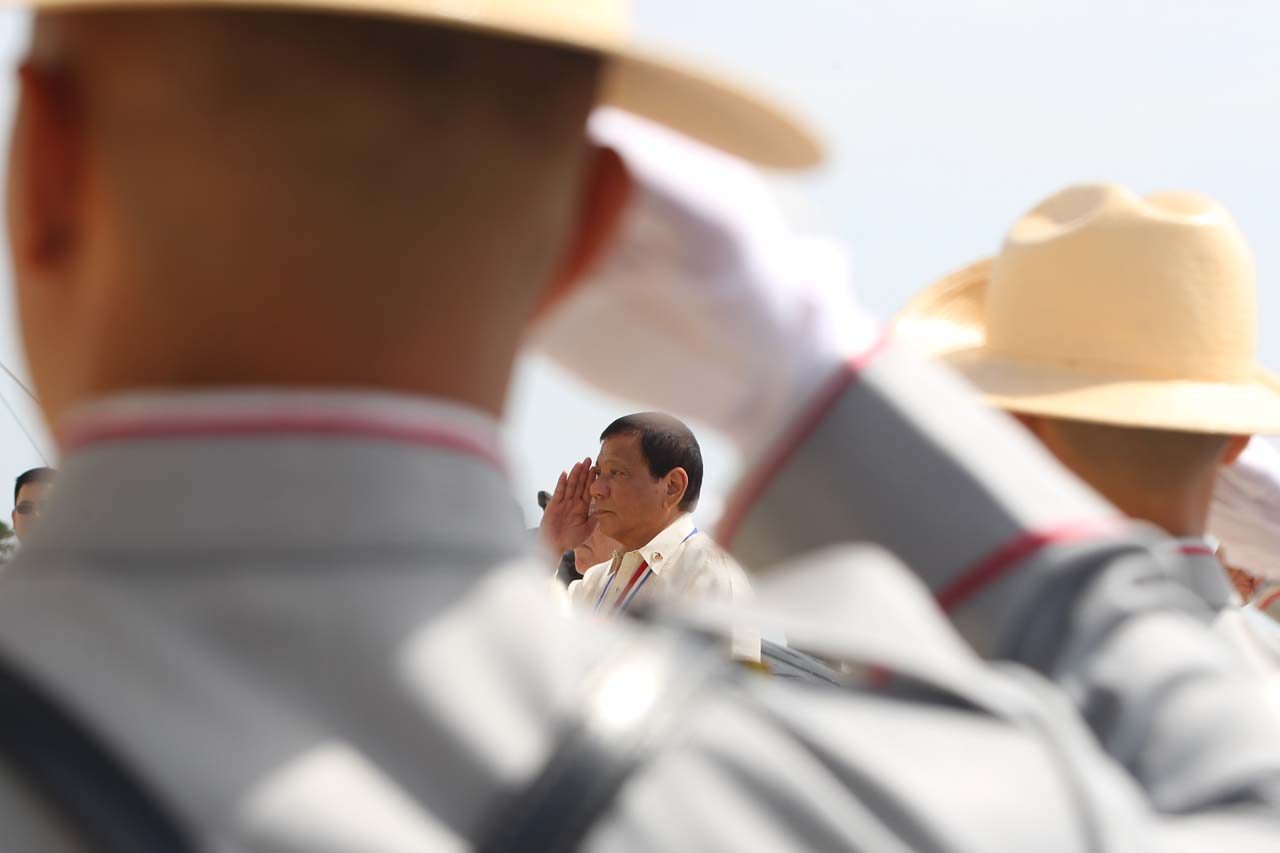 Facebook Twitter Copy URL
Copied
(UPDATED) The country faces challenges to its sovereignty, including the Marawi crisis and the West Philippine Sea dispute

MANILA, Philippines (2nd UPDATE) – In his first Independence Day message while in power, President Rodrigo Duterte called on his countrymen to help preserve Philippine sovereignty as a way to honor the country’s heroes.

But at the last minute, the President skipped the rites in Luneta. Presidential Spokesman Ernesto Abella did not give a reason for his absence, but Foreign Secretary Alan Peter Cayetano said he was told the President was not feeling well.

The President, who often likes to talk about the country’s colonial past in his speeches, recalled how Filipinos of bygone times sacrificed their lives for the Philippines to become a full-fledged nation.

“The journey to freedom was a long and arduous one – which our countrymen paid for with blood, sweat, and the ultimate act of selfless sacrifice,” he said.

Duterte has never hesitated to express his anger, even disgust, at countries which colonized the Philippines, including the United States and Spain.

In speeches, he has condemned human rights abuses by American soldiers seeking to subjugate Muslims in Jolo in the early 20th century.

He has also frequently expressed derision for the claim of “discovery” of the Philippines by Portuguese explorer Ferdinand Magellan when natives were “doing perfectly right on our own.”

To honor Lapu-Lapu as the first Filipino who resisted Spanish rule, Duterte created the Order of Lapu-Lapu with which to award persons supportive of his administration’s programs.

“Let us take inspiration from our forebears who valiantly fought and offered their lives that we may have the liberties that we enjoy today,” he said in his message.

The country celebrates Independence Day amid several challenges to sovereignty and national security. In Mindanao, government troops are on their 21st day of clashes with the local terrorist Maute Group. June 12 is also the 21st day of martial law in Mindanao.

Duterte said he declared martial law due to the threat posed by the Islamic State (ISIS), an international terrorist group that supposedly seeks to establish a wilayat or province in Mindanao.

In the South China Sea (West Philippine Sea), the country has not dropped its claim over the area even if it overlaps with the expansive claim of regional power China. Duterte, who has sought warmer ties with Beijing, claims Chinese President Xi Jinping threatened war should the Philippines use the 2016 Hague ruling to assert its sovereign rights over the disputed sea.

I join the entire Filipino nation in celebrating the 119th Anniversary of the Proclamation of Philippine Independence.

More than a century ago, thousands have laid down their lives so that we may live with the dignity and rights befitting a free nation. The journey to freedom was a long and arduous one – which our countrymen paid for with blood, sweat, and the ultimate act of selfless sacrifice. Despite the insurmountable hardships, the patriotism and undaunted spirit of the Filipino led to our triumph against the shackles of slavery and abuse.

On that day, we showed our colonizers and the rest of the world what we Filipinos are made of. Let us take inspiration from our forebears who valiantly fought and offered their lives so that we may have the liberties that we enjoy today. Let us pay homage to their heroism by preserving our sovereignty and performing our own civic rights and responsibilities.

After all, it is our inherent duty as citizens to ensure that the Philippines fulfills its destiny as a great and prosperous nation.