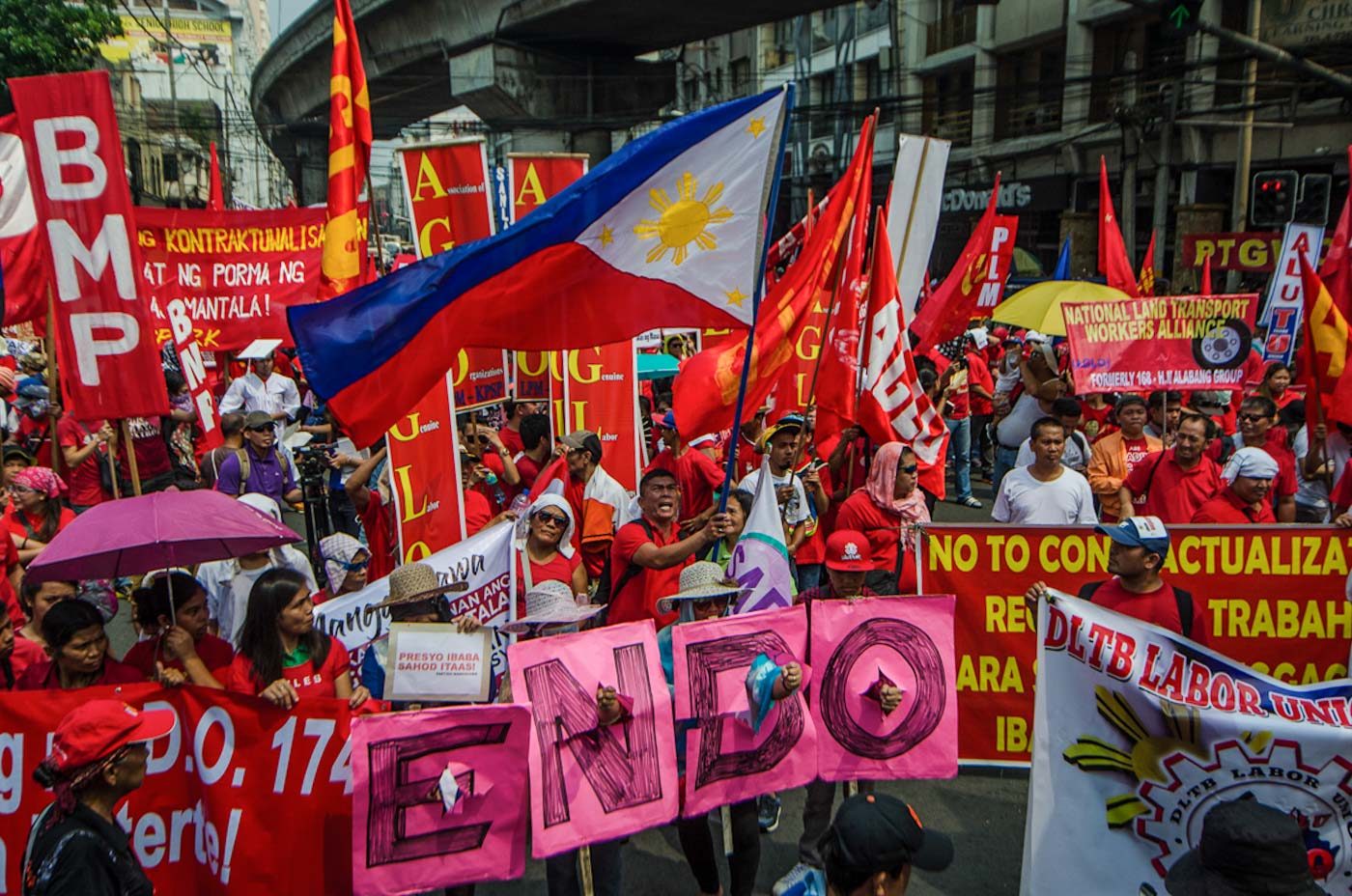 MANILA, Philippines – President Rodrigo Duterte asked workers during his first Labor Day celebration last May 1 for more time to eliminate labor contractualization. “I stand firm in my commitment to end endo, just give us time,” he said.

His commitment is evident. As of June 16, his one-year-old administration has regularized 49,393 workers – a government effort to provide citizens with decent and secure work neglected since the the time of Ferdinand Marcos.

Still, much has yet to be done.

In 2016, the Department of Labor and Employment (DOLE) identified 65,000 employees who are victims of the so-called endo (end of contract) practice. This refers to those directly employed by a company but are not regularized even if they have served beyond the mandated 6-month probationary period. Labor unions estimate the number to be as high as 1.3 million.

DOLE is boosting its efforts, and has announced the hiring of additional inspectors to monitor erring companies. It will also ask Congress to give the department more budget to hire additional inspectors and raise the current manpower from 610 to 810. There are 936,554 business establishments nationwide that the DOLE has to cover.

The more challenging work ahead is regularizing the 670,000 contractual workers hired by manpower agencies and sent to client establishments. DOLE Secretary Silvestre Bello III’s solution to this is Department Order 174, which has failed to appease labor unions.

The order is for agencies, not the main employers, to regularize their workers. Labor groups say that, in effect, it only poses stricter guidelines for manpower agencies but does not necessarily end contractualization by direct employers.

Proposals to address are pending in both houses of Congress, but there have been delays and finger pointing, passing the buck to President Duterte for supposedly not certifying the bills as “urgent.”

Efforts are now focused on seeking Duterte’s signature on an executive order (EO) that will end hiring through a middleman. The EO is proposed by a united front of different labor groups and the National Anti-Poverty Commission (NAPC).

“What the EO is prohibiting is the 3rd party contracting at manpower cooperatives. The EO will address the problems of the proliferation of contractual employment through manning agencies so it means, if this [practice] is corrected, those contractuals who are directly hired as seasonal or poject-based have chances of regularization,” explained NAPC formal labor and migrant workers representative Edwin Bustillos.

The EO was submitted to Malacañang on May 9, and the NAPC was supposed to convene en banc on May 15 to discuss the proposal. The President chairs the NAPC.

But the meeting was postponed to June 27, due to the President’s engagements and in the wake of the security crisis in Marawi City. It was again postponed indefinitely.

“The Office of the President has not updated us on the date. But they are really saying that we will have an en banc to take up the agenda,” said Bustillos in Filipino.

NAPC is optimistic Duterte will sign the order since he himself announced it in his Labor Day speech. But it has to keep a close eye on it if the version they originally proposed will be adopted and signed.

“It’s now in the hands of the President to decide…. We put the President on the spot – are you going to sign the EO or not? What are your alternative proposals?” he said.

While the EO is already a law in itself, labor rights advocates still urge the President to ceritfy as urgent the bills that seek to end contractualization. It will be the long-term solution to the problem, they say.

There are 7 related bills filed in the Senate, while there are 24 in the House of Representatives. All are pending at the committee level.

Duterte said in a meeting with labor leaders on February 27 that he was leaning toward certifying the bills as urgent. He has yet to do so.

Trade Union Congress of the Philippines (TUCP) Representative Raymond Mendoza, vice chairperson of the House committee on labor and employment, said Duterte’s imprimatur is crucial for the passage of the bill.

“We need the presidential imprimatur. Otherwise, I’ll be frank I’ve filed these bills and, at one time, it only reached the committee report level,” Mendoza told Rappler in an interview.

Senator Joel Villanueva, meanwhile, said it is possible for Congress to pass the bill within the year if the President finally gives his seal of approval.

Villanueva said the Senate committee report is “ready and waiting for calibration with the House version for ease in legislation.” They target to pass this when the session resumes in July, after President Duterte’s second State of the Nation Address.

The House committee report on the bills, on the other hand, has yet to be drafted. The committee has just concluded its nationwide hearings with labor groups – held in the cities of Baguio, Cebu, and Davao. Another one was also intended for the business sector, said Mendoza.

The two lawmakers are authors of the anti-contractualization bills filed with their respective chamber. Villanueva authored Senate Bill 1116, while Mendoza authored House Bill 4444.

Villanueva’s measure intends to limit contracting and “remove the ambiguities” of the Labor Code by:

Mendoza’s bill, similar to the measure filed by Bayan Muna Representative Karlos Zarate, is more prohibitive. It aims to end all forms of fixed-term employment.

Legislators from both chambers would have to reconcile the differences when the bills range from being regulatory to restrictive.

“Our goal in the Senate is to have a holistic and balanced legislation that would protect the rights of our workers, promote their welfare and at the same time promote the creation of quality employment,” said Villanueva.

For Mendoza, it’s the route of restriction that must be taken.

“We’ve been working under the regime of regulations for 30 years, and what has happened? It proliferated. 30 years ago you can tell that employment is regular but right now, the general rule is contractuals, casuals, cost-cutting measures rather than regular employment,” he said.

The Employers Confederation of the Philippines, however, does not see the need to pass a new law promoting security of tenure. ECOP president Donald Dee said they have sent their position to both chambers, arguing that the provisions included in the proposal are already in the Labor Code.

Implementation is what they are keen on. Dee says they have started implementing DO 174 and checking their members’ agreements with illegal contractors. There won’t be any sanction from ECOP, but it will be reporting these companies to the DOLE – something it hasn’t done before.

“As a practice, we didn’t do that in the past,” said Dee. “But because of what we have seen and the new governance philosophy, we feel now that we are duty-bound to report any and all infingement.”  – Rappler.com