Jul 1, 2017 1:00 PM PHT
Lian Buan
Facebook Twitter Copy URL
Copied
The justice department, the Solicitor General, and the Court of Appeals have helped the cases of the alleged pork barrel scam mastermind in no small measure 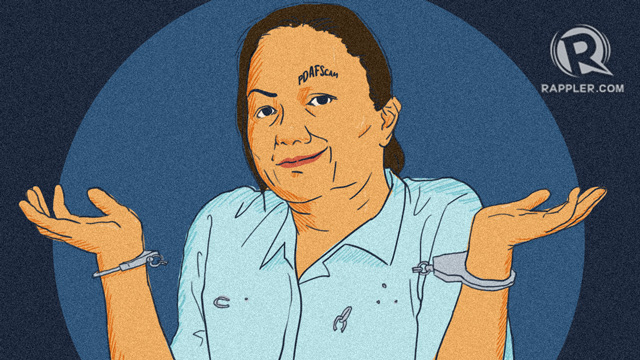 For one, her lawyer in the plunder cases at the anti-graft court Sandiganbayan gives it a year or two and she would walk free, possibly even earlier. And then there’s the Department of Justice (DOJ), which is seriously considering her for the state-funded witness protection program (WPP).

“Compare it to our situation before, we’re much better now,” Napoles’ lawyer Dennis Buenaventura told Rappler as trials kicked off at the Sandiganbayan in late June.

Napoles faces before the anti-graft court 12 cases related to the illegal diversion of lawmakers’ Priority Development Assistance Fund (PDAF): 5 of plunder, 7 of graft. The plunder cases are non-bailable; she would have to convince 5 divisions to grant her bail before she is set free. She has so far won two petitions.

So why the confidence amid the many obstacles to freedom? 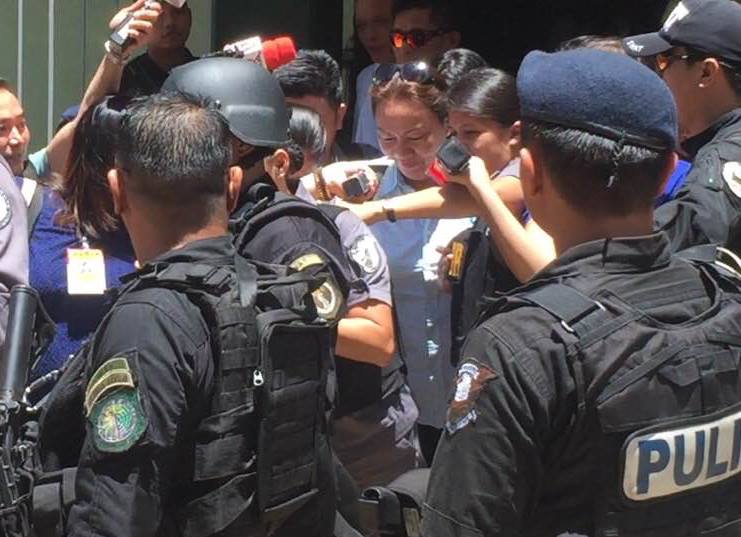 Buenaventura cites Napoles’ acquittal by the Court of Appeals (CA) in the serious illegal detention case filed against her by Benhur Luy, the whistle blower in the pork barrel scam.

Solicitor General Jose Calida, who recommended Napoles’ acquittal to the CA, repeatedly said this decision on the detention case would not affect her plunder cases.

But Buenaventura sees it very differently, that it will have a domino effect.

(In our view, the nature of the cases is the same. Although there supposed to be many versions, they’ve only got one case – that it’s according to Benhur. That’s it. Remove Benhur, all of those cases will fall apart.)

Calida dismissed the view of court observers cited by the Philippine Center for Investigative Journalism (PCIJ) that Napoles’ victory in the illegal detention case would badly damage the credibility of complainant Luy, and this in turn will make him an incompetent witness in the plunder cases.

Napoles’ own lawyer has a similar reading of this development.

“Almost always, Benhur starts his story with his being illegally detained. Then what did the CA say? The CA said he wasn’t. What does that mean? It means if you believed Benhur before, if you believed him 80%, that has decreased now to only 50%,” Buenaventura said in Filipino.

“The CA [trial] should have been the best chance for Benhur to show his credibility, because that (detention) supposedly happened to him. That was supposedly his personal knowledge, his personal experience, as compared here in the PDAF scam that it happened to other people, that he wasn’t there, he’s just saying that Napoles said it. So compared to the chances of him saying the truth, his chances were stronger in the CA case, but it was proven otherwise,” Napoles’ counsel said.

The prosecution, of course, rejects this assertion. “We do not subscribe to that,” said Joefferson Toribio, lead prosecutor in the plunder case against former Senator Ramon “Bong” Revilla Jr, who allegedly connived with Napoles. 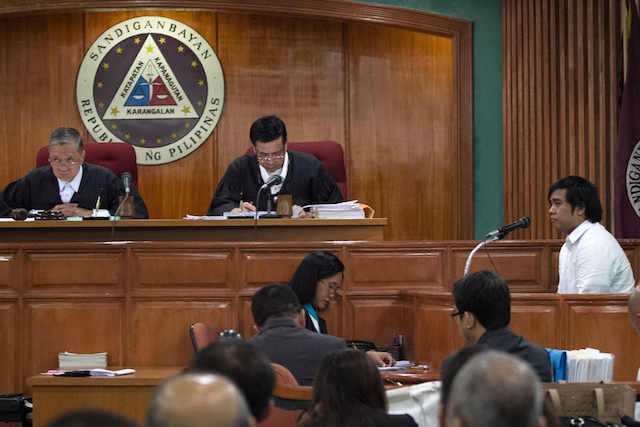 Do they have more witnesses to link Napoles to the scam, other than Luy’s assertions? “We already did [present them] in the bail hearings,” Toribio said.

One such witness is Ruby Tuason, the socialite-turned-state witness who confessed to personally delivering kickbacks from Napoles to the other plunder defendant, detained former Senator Jinggoy Estrada.

And then there are the ledgers and the hard drive which, if we are to believe Luy, contain all the smoking guns against Napoles.

Buenaventura shrugs off Ruby Tuason and the other evidence as he maintains that the government is just relying on Benhur’s word for its case.

“Ruby Tuason is nothing. Ruby Tuason may have mentioned something, but if you analyze all the pieces of evidence, it’s only Benhur. Remove him, they’re all gone,” he said.

Aguirre doesn’t keep it a secret that he has serious intentions of turning Napoles into a witness; if not a state witness, at least placed under the witness protection program (WPP), which he has authority over.

The justice secretary defended this intentions, saying it appears now that Napoles might qualify as a witness.

What qualifies her? “Dapat walang ebidensya and walang ibang testigo na makakapagpatunay sa sinasabi ni Janet Napoles,” Aguirre told Rappler. (Janet Napoles should have evidence and testimony that no one else can prove.)

Isn’t Luy, who is under Aguirre at the WPP, the “other evidence, other witness”?

“I would not like to venture into that because…we would be prejudging how we’re going to resolve  the case. You see, no everything Napoles will say, Benhur can prove. So [citing] that is what we’ll do,” Aguirre said in Filipino.

Rappler asked Luy’s lawyer Raji Mendoza in May whether there are any threats to his client’s standing in the WPP, and he said “none so far.”

We tried to ask him again in June, but Mendoza said he would have to seek Luy’s permission and confirmation first before he could answer further questions. (READ: Napoles to Benhur: You stole my PDAF) 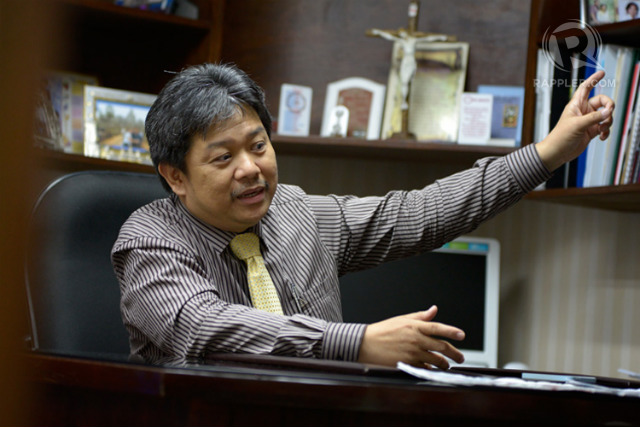 The DOJ has created a task force to reinvestigate the PDAF scam. It will be headed by Undersecretary Antonio Kho Jr, Aguirre’s hire who’s also an alumnus of San Beda and Lex Taleonis Fraternity.

Napoles’ lawyer Stephen David, who now handles the proceedings in the DOJ, also happens to be an alumnus of San Beda.

His wife Lanee Cui-David, also from San Beda and who also used to handle cases for Napoles, has been appointed by Duterte as deputy commissioner of the Bureau of Internal Revenue (BIR). (READ: Napoles lawyers: Holy Spirit is lead counsel)

Aguirre, citing information from David, said Napoles will be a private complainant in fresh cases, which will be filed before the DOJ in a reinvestigation being branded now as an effort to correct the errors of the past administration’s selective justice.

Ombudsman Conchita Carpio Morales retains primary jurisdiction over the pork barrel scam cases, and even Aguirre admits he will still have to transmit his findings to the Ombudsman.

Just the same, Aguirre will be targeting former Budget Secretary Florencio Abad as the supposed instigator of the scam, and the key personality to establishing Napoles’ qualification to be a witness – that, compared to Abad, Napoles is not the most guilty.

(Janet is the private person, the other is a public official. According to her statements, she was only taught, someone instigated her that this is what we’ll do, there’s conspiracy between them. My opinion there is that the public officer is more guilty than the private individual because the officer is sure to have used his position.)

Apart from Abad, Aguirre said the fresh complaints will implicate opposition senators Franklin Drilon, Antonio Trillanes IV, and Leila de Lima. Aguirre added he has lent his copies of the 2009-2016 General Appropriations Act (GAA) to David so they could countercheck the lawmakers’ PDAF, but didn’t confirm whether the Napoles camp’s new complaints will cover the said period.

Napoles had implicated Abad in past statements, saying the former congressman taught her how to transact with lawmakers using their pork barrel. The connection to Drilon remains loose, the primary evidence being a photo of him and the Napoles couple at a party. But she never named Trillanes and De Lima in earlier affidavits.

However, the admissibility of such new affidavits is contested, as the Napoles camp has filed a motion to exclude them from the proceedings before the Sandiganbayan. The affidavits contain the ‘Napolist‘ she made in 2014 for then Justice Secretary Leila de Lima who, in turn, gave it to the Senate blue ribbon committee.

According to Napoles’ lawyers, her affidavits were executed to support her application for state witness, but she was later rejected by Ombudsman Morales.

“Republic Act 6981 (Witness Protection, Security and Benefit Act) is explicit, that if a person who applied in the Witness Protection Program was later on denied of his application in the program, any sworn statement or other testimony he executed in such application shall not be admissible,” reads her motion before the anti-graft court.

What do the affidavits say? “We can’t even go to that point of what the contents are, right? Our position is if it cannot be used, there’s no point discussing it,” Buenaventura said.

In a press conference in May, Aguirre said the DOJ would not be bound by those affidavits. “If the list is accurate, we could go by it. But we don’t need a list as long as you could prove your accusations,” Aguirre said.

There is parallelism in the Napoles camp’s moves in Sandiganbayan to Aguirre’s pronouncements in the DOJ as far as the 2014 affidavits are concerned.

Buenaventura just laughs off the connection: “Our position here [as lawyers] goes beyond JLN (Janet Lim Napoles). If this happens to somebody else, it should not be done, otherwise you would discourage someone who wants to apply…they would think of what happened to JLN where she applied as witness and then used her own affidavits against her.” 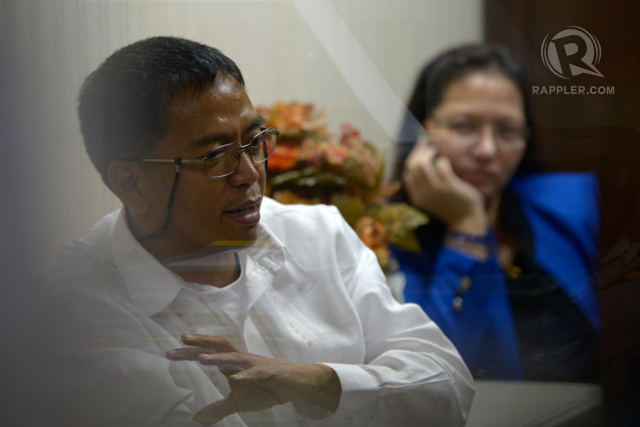 Buenaventura always goes back to the CA decision that for them establishes Luy as a liar, or who at least concealed some facts.

But doesn’t the principle apply as well to Napoles, who, by submitting new affidavits, is effectively saying she withheld or altered truths in her earlier affidavits?

Legally speaking, the Napoles camp says, they are very confident. Buenaventura criticizes the prosecution’s strategy so far of presenting witnesses which range from records officers to their own investigators at the Ombudsman, saying this shows “they really have nothing.”

Bong Revilla’s lead counsel Estelito Mendoza also scores the prosecution for presenting “irrelevant witnesses,” and told the court in the last hearing to cut to the chase and start admitting “core evidence and witnesses.”

In past bail hearings, the prosecution had been scolded by justices usually on the way they presented their witnesses. Mendoza, ever since he came on board last January, also liked to incite showdowns in court appearing to intimidate prosecutors. (READ: Plunder cases: Highs and lows)

But Toribio would just remind everybody afterwards: they have won bail petitions where court ruled evidence was strong enough not to grant the defendants bail.

Buenaventura said the CA ruling encouraged them to apply for bail again. If not, they intend to file a demurrer of evidence when the prosecution rests its case. It means they no longer see the need to present their own evidence on their assertion that the prosecution’s weak evidence is enough merit to dismiss a case. When a demurrer is granted, the case is dismissed.

He said they have yet to finalize their list of witnesses because they don’t expect the trial to reach that point.

“We’re already halfway in the case because some of these had been presented during the petitions for bail, so we’re close to finishing this in one year or less than two years,” Buenaventura said.

Aguirre told Rappler that the DOJ reinvestigation will not, in any way, affect the pending cases before the Sandiganbayan. Asked whether the plunder cases against the senators will stay as is no matter the result of their investigation, Aguirre said: “Yes.”