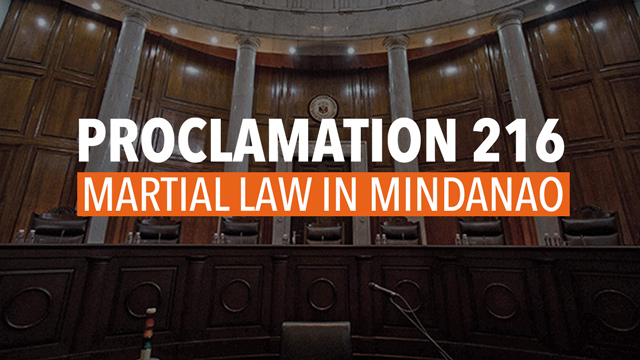 SC Spokesperson Theodore Te said in a news briefing on Tuesday that 11 justices voted to dismiss the petitions against martial law, 3 voted to partially grant the petitions, and one voted to grant them.

The petitions, filed by 3 groups including opposition lawmakers from the House of Representatives, argued that Duterte’s Proclamation No. 216 had no sufficient factual basis.

Malacañang called the ruling a show of “unity” against a “common enemy.”

The SC voted in an en banc session Tuesday morning after 3 days of oral arguments in June, the last day spent in a private session with Defense Secretary Delfin Lorenzana and Armed Forces of the Philippines (AFP) chief Eduardo Año, martial law administrator and implementer, respectively.

On Monday, July 3, Lorenzana said he believed that he and Año had proven that there was basis for Duterte’s proclamation.

Ahead of the ruling, Philippine National Police (PNP) chief Director General Ronald dela Rosa said that “as of now,” he and Año were “inclined to recommend” the extension of martial law in Mindanao until the “rehabilitation” phase in Marawi City.

During the oral arguments, Senior Associate Justice Antonio Carpio said there was no evidence of an actual rebellion outside Marawi City.

Solicitor General Jose Calida argued that the presence of the Maute terror group’s affiliates in other parts of Mindanao meant security threats existed elsewhere. But Carpio established, and even got Calida to agree, that the government would be able to respond to security threats even without declaring martial law.

For one, warrantless arrests are allowed in the continuing offense of rebellion as far as terrorists are concerned. Carpio also said martial law did not add anything to the calling out powers of the President to the military and the police to suppress violence.

Calida had said during oral arguments that martial law only provided an exclamation point to the calling out powers, intended to send a clear message to the terrorists.

The High Court issued the ruling as martial law in Mindanao – and the Marawi siege that triggered its proclamation – entered Day 43. Under the maximum 60-day period prescribed under the Constitution, martial law will be lifted on July 22, unless Duterte seeks an extension subject to congressional approval.

Congress will vote in a joint session on any extension request.

Two other groups of petitioners had questioned before the SC why the House of Representatives and the Senate did not convene much earlier, or when martial law was proclaimed on May 23.

They argued that the language of the Constitution was clear in requiring both chambers to deliberate martial law on the floor upon proclamation, and decide whether to approve or reject it.

Calida had argued that Congress only needs to convene if it intends to revoke martial law.

It was the second time for the Supreme Court to address martial law petitions under the 1987 Constitution.

In 2012, the SC dismissed petitions against former president Gloria Macapagal-Arroyo’s proclamation of martial law in Maguindanao, but only because Proclamation No. 1959 was considered moot as it was already lifted in 2009.

Arroyo imposed martial law in Maguindanao on December 4, 2009, following the Maguindanao massacre on November 23, 2009, but lifted it 8 days later.

The High Court did not issue any guidelines on military rule in its 2012 decision. Carpio, a dissenter, said then that the SC lost an opportunity to come out with a clearer guideline for future presidents. – Rappler.com