Jul 5, 2017 7:35 PM PHT
Lian Buan
Facebook Twitter Copy URL
Copied
(UPDATED) 'We should have the courage to never again clothe authoritarianism in any disguise with the mantle of constitutionality,' Leonen says in his dissenting opinion 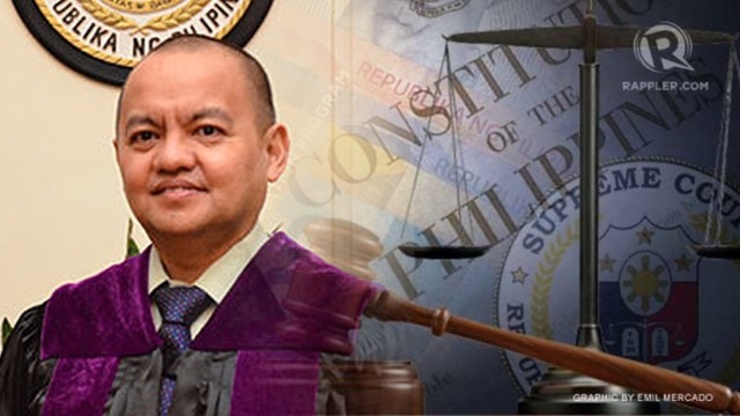 Leonen granted the consolidated petitions of 3 groups who wanted to nullify the proclamation for having insufficient factual basis. The SC voted 11-3-1 in favor of the government.

Leonen posted on his Twitter account on Wednesday, July 5, parts of his dissenting opinion. According to Leonen, the crisis in Marawi is not considered rebellion.

“In conscience I do not see the situation as providing for the kind of necessity for the imposition of Martial Law in Marawi as well as throughout the entire Philippines,” he said.

“Rather, I read the situation as amounting to acts of terrorism which should be addressed in a decisive but more precise manner. The military can quell the violence. It can disrupt many of the planned atrocities that may yet to come. It can do so as it had on many occasions in the past with the current legal arsenal that it has,” the Associate Justice added.

According to Leonen, the forces sowing violence in Marawi should not be called rebels, but instead, terrorists.

“I honor the sacrifices of many by calling our enemy with their proper names: terrorists capable of committing atrocious acts. They are not rebels desirous of a viable political alternative that can be accepted by any of our societies. With their plans disrupted and with their bankrupt fanaticism for a nihilist apocalypse, they are reduced to a fighting force violently trying to escape. They are not a rebel group that can hope to achieve and hold any ground,” Leonen said in his dissent.

During the oral arguments, Solicitor General Jose Calida admitted to the High Court that martial law has no added legal powers except that it has an exclamation point, meant to make terrorists listen.

“We should temper our fears with reason. Otherwise, we succumb to the effects of the weapons of terror. We should dissent – even resist – when offered the farce that Martial Law is necessary because it is only an exclamation point,” Leonen said.

"We should dissent–even resist–when offered the farce that Martial Law is necessary because it is only an exclamation point." #dissent

Leonen added: “In my view, respondents have failed to show what additional legal powers will be added by Martial Law except perhaps to potentially put on the shoulders of the armed forces of the Philippines the responsibilities and burdens of the entire civilian government over the entire Mindanao region. I know that the Armed Forces of the Philippines to be more professional than this narrative.”

Leonen echoed the fears of some opposition that the proclamation of martial law is creeping authoritarian rule.

“Never again should this court allow itself to step aside when the powerful invoke vague powers that feed on fear but could potentially undermine our most cherished rights. Never again should we fall victim to a false narrative that a vague declaration of martial law is good for us no matter the circumstances. We should have the courage to never again clothe authoritarianism in any disguise with the mantle of constitutionality,” the Associate Justice said.

Leonen added: “The ghost of Marcos’ Martial Law lives within the words of our Constitution and rightly so. That ghost must be exorcised with passion by this Court whenever its resemblance reappears.”

“We all need to fight the long war against terrorism. This needs patience, community participation, precision and a sophisticated strategy that respects rights while at the same time using force decisively at the right time and in the right way. The terrorist wins when we suspend all that we believe in. The terrorist wins when we replace social justice with disempowering authoritarianism,” Leonen said.

The majority ruling gave Duterte the sole discretion to put the entire Philippines under martial law if he sees it necessary.

Leonen said Duterte’s Proclamation 216 “hides its intent” to expand the scope of martial law, not just geographically but also in terms of its targets.

Leonen was referring to the military directive to target even drug syndicates and other peace spoilers in the region.

“Arresting illegal drug syndicates and peace spoilers under martial law also unduly expands Proclamation No. 216. The factual bases for the declaration of martial law as presented by the respondents do not cover these illegal acts as rationale for its proclamation. They do not also fall within the concept of rebellion,” Leonen said.

“The scope of martial law as contained in Proclamation No. 216 issued last May 23, 2017 expands with every new issuance from its administrators. Proclamation No. 1081 of 1972, which ironically was more specific, evolved similarly,” Leonen added.

The Bayan group of petitioners said the SC’s historic ruling set very low standards to declare martial law, and may have set the basis for a nationwide proclamation. Opposition lawmakers expressed the same fear and warned against Duterte’s “creeping authoritarian rule in the guise of safety and security.”

Malacañang called the ruling a show of “unity” against a “common enemy.” Business groups supported the SC decision and said martial law is necessary to resolve terror threats. – Rappler.com