MANILA, Philippines – Anyone from any corner of the world with a good internet connection can now go on a virtual tour of the Philippines’ Presidential Museum and Library (PML).

PML, the Presidential Communications Operations Office, and Google worked together to bring two exhibits showcasing the museum to Google Arts & Culture, an online repository of millions of photos, videos, and documents of art, culture, and history.

The two exhibits, “Malacañang as Prize, Pulpit, and Stage” and “Relics of Power: remembering the Philippine Presidents,” were launched on Wednesday, July 5, at Kalayaan Hall, where the PML is located.

With PML on Google Arts & Culture, netizens can have a look at the various presidential memorabilia and historical artifacts in its collection.

The exhibits can be accessed at g.co/pmlmalacanang. Google Arts & Culture can be viewed on desktop or through an app available both on Google Play and App Store.

PML Director Edgar Ryan Faustino said he was at first “very hesitant” about the project because he thought it might lessen the number of potential museum visitors since the collection would be available online.

But he had a “paradigm shift” after the plan was presented to him.

“Instead of thinking that interest in the museum would wane, it may even whet people’s appetites to come here and see the exhibits themselves,” he said during the launch.

It would also allow people with no resources to visit the museum itself to get a “glimpse of the rich history and profound duties and responsibilities of the Philippine president,” he said. 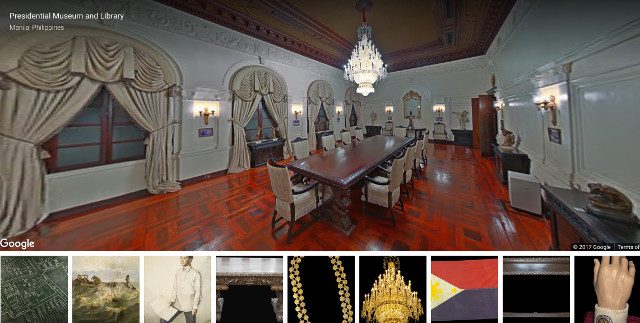 “What it allows is anyone to visit Malacañang Palace from his home, from the streets, from the bus from anywhere you want,” said Caessa.

The technology used, called Museum View, involves an operator pushing a special trolley through the rooms to capture every inch of the space.

Thus, anyone online can see the precious artifacts and presidential memorabilia on display. These include the 1898 Declaration of Philippine Independence signed by Emilio Aguinaldo, a yellow piano given to Corazon Aquino as a gift, and a compilation of transcripts from Manuel Quezon’s press conferences.

With the Malacañang and Google collaboration, PML joins prestigious galleries and museums on Google Arts & Culture like London’s Tate Museum, New York’s Museum of Modern Art, and the Louvre in Paris.

Not satisfied with an online tour? You can book a visit to the PML by sending an email (send to pml@malacanang.gov.ph and malacanangmuseum@gmail.com) or regular mail to the Tours and Visitor Relations Coordinator at least 3 working days before your intended visit.

The request must include the preferred date and time of the tour, complete list of names and birth dates of guests, contact details and complete address of your group’s representative.

Foreign visitors must provide a photocopy of their passport’s main page. – Rappler.com