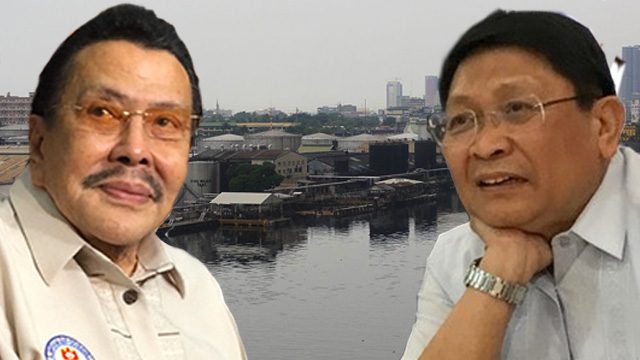 MANILA, Philippines – It’s supposedly a win-win for the city of Manila and the Metropolitan Manila Development Authority (MMDA).

In a press statement Monday, July 10, Manila Mayor Joseph “Erap” Estrada said he is in talks with MMDA chairman Danilo “Danny” Lim about using the sludge of the Pasig river for his reclamation projects.

According to Estrada, the idea was pitched by Lim, and he welcomed it.

“If we can help, why not? Once it (Pasig River) is dredged, it will also benefit us since the river passes through our city,” the Manila Mayor and former president said.

The Pasig River has been in need of dredging for a long time. Waters have become shallow from the Pasig’s rising riverbed caused primarily by silt and sludge. From 12 meters, the river is now just two meters in depth on average.

Lim, in turn, announced that they had consulted experts who affirmed that waste collected from dredging activities could be used as “infill” or fillers for land reclamation.

“Yes, it is possible,” the MMDA chief said. “Ang problema kasi, bumabaha itong Metro Manila, ‘di ba? Isang dahilan n’yan ay ang Pasig River, heavily silted na. Kailangan talagang i–dredge (The problem is that it floods in Metro Manila. One of the reasons is the Pasig River, which is heavily silted already. We really need to dredge it).”

Once the dredging works start, Lim explained, it will be hard and costly to find a place to dump the millions of cubic meters of silt to be excavated from the riverbed, thus the idea of using it to fill up land reclamation projects.

Estrada believes in land reclamation as he already has 4 projects in the pipeline.

The others are the New Manila Bay International Community (407.42 hectares), the controversial Solar City urban center (148 hectares), and the P7.4-billion expansion of the Manila Harbour Center in Tondo.

Estrada is also eyeing relocation to reclaimed lands for thousands of families living in the slums with China’s Shanghai Nanjiang Group. (READ: Manila to relocate 7,000 families in esteros)

Projects such as these have been criticized by environmentalists and the Church, who say these are not sustainable and would put communities at risk of flooding. (INFOGRAPHIC: Why Manila Bay matters)

Estrada, on the other hand, has been arguing that the projects will bring prosperity to the city and the region. – Rappler.com