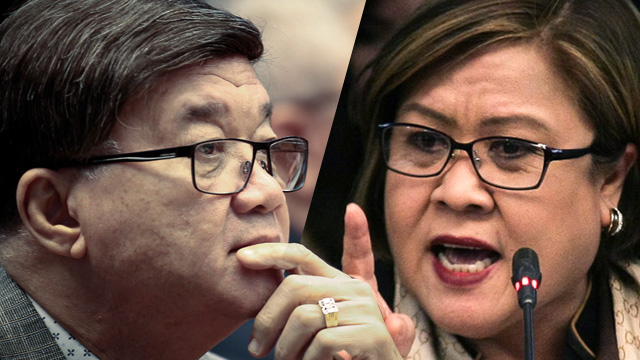 De Lima listed the multiple accusations in her 27-page complaint submitted to the Office of the Ombudsman on Thursday.

First, De Lima alleges that Aguirre committed negligence – a violation of the Revised Penal Code – when he supposedly “failed to investigate and prosecute a single case of drug-related” extrajudicial killings.

De Lima supposedly has information that Aguirre issued a legal directive to the National Prosecution Service (NPS) that “no public prosecutor is allowed to file a case against any law enforcement official enforcing the administration’s war on drugs.”

“This is the reason why up to the present, and after more than 7,000 deaths, not a single case of PNP (Philippine National Police) killing or ‘death under investigation’ recorded by the PNP itself as drug-related killings, other than those cases exposed in the Senate EJK hearings, was ever investigated or prosecuted by the NBI (National Bureau of Investigation) and the NPS under respondent DOJ Secretary,” De Lima’s complaint reads.

De Lima also accused Aguirre of fabricating the charges in the 3 drug cases filed against her last February. She added that Aguirre may have even pressured the Anti-Money Laundering Council (AMLC) and its former chief Julia Bacay-Abad to dig up supposed dirt on her. (READ: De Lima’s fate: Karma or political persecution?)

“It is not farfetched that the sudden or untimely resignation of former AMLC Executive Director Julia Bacay-Abad a month after President [Rodrigo] Duterte’s criticism of AMLC officials for allegedly being uncooperative, could have been due to pressures being exerted on Bacay-Abad and other AMLC officials to come up with something adverse to complainant,” De Lima said.

The senator also accused the justice chief of administrative violations over incidents of fake news. (READ: NUJP to Aguirre: Media won’t be scapegoats for your ‘lies’)

A youth group earlier filed a similar complaint before the Ombudsman over Aguirre’s media announcements, some of which turned out to be false, including a purported meeting in Marawi City between opposition lawmakers and influential clans. (READ: Bam Aquino demands public apology from Aguirre over fake news)

“These acts constitute dishonesty, grave misconduct, oppression, inefficiency and incompetence in the performance of official duties, and conduct grossly prejudicial to the best interest of the service,” De Lima said.

While critics have tagged Aguirre as the “fake news king,” he continues to enjoy the President’s trust. De Lima, meanwhile, is one of the fiercest critics of Duterte. (READ: De Lima in jail: ‘I never imagined Duterte would be this vindictive’) – Rappler.com