Jul 25, 2017 5:11 PM PHT
Mara Cepeda
Facebook Twitter Copy URL
Copied
Majority Leader Rodolfo Fariñas grills one of the officials over her ownership of a property, but eventually moves that she be released along with the others 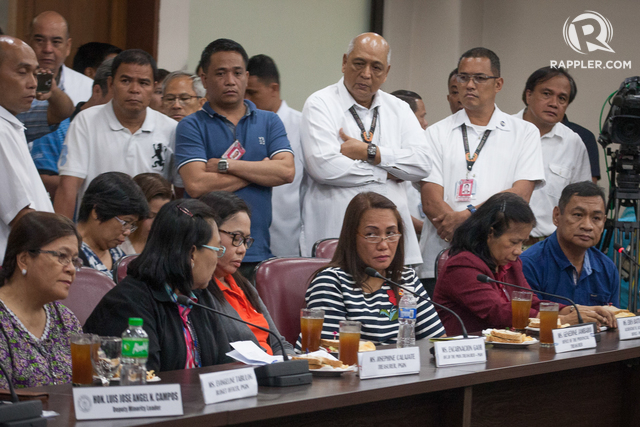 MANILA, Philippines – After 57 days, the House committee on good government and public accountability finally granted freedom to the 6 Ilocos Norte officials it detained last May.

House Majority Leader Rodolfo Fariñas asked the panel to release the officials from detention during the probe into the alleged misuse of P66.45 million worth of Ilocos Norte tobacco funds on Tuesday, July 25. (READ: Red flags in Imee’s Ilocos Norte and P66.45M tobacco fund use)

After previously refusing to confirm whether or not their signatures are the ones on the documents for the purchase of motor vehicles, the so-called “Ilocos 6” finally admitted to Fariñas that they signed the papers:

Prior the Ilocos Norte officials’ admission, Governor Imee Marcos was grilled by the committee over her “gross negligence” in authorizing the motor vehicle transactions despite several red flags.

The committee previously cited the Ilocos Norte officials in contempt and detained them on May 29 after they gave “dismissive” answers when Fariñas presented copies of documents bearing their signatures on the purchase of motor vehicles.

Upon the officials’ release from House detention, Marcos immediately stood up and hugged them. It was a tearful reunion for the Ilocanos.

The 6 Ilocos Norte officials had secured a ruling from the Court of Appeals (CA) ordering their provisional release, but the House leadership refused to grant it.

Marcos then filed an omnibus motion before the Supreme Court, asking the justices to take over the detention case and compel the House to release the officials.

A case of corruption?

Before making his motion, Fariñas had also grilled Jambaro over her ownership of a 6 twin-villa complex with a swimming pool.

The Majority Leader showed pictures of the property and cited documents of her ownership during the hearing.

Jambaro was the person who had encashed the P32 million the Ilocos Norte provincial government used to buy 70 mini-trucks for municipalities on September 12, 2012, which is being probed by the House.

“Yes [I live there], pero may mga relatives ako. May mga foreign aid din. Sharing din po kami diyan,” said Jambaro. (Yes, I live there, but I have relatives there also. We get aid from abroad, too. We share the costs there.)

“Nakapangalan sa ‘yo ‘yan. ‘Yan din po ang sinabi ni Chief Justice [Renato] Corona,” warned Fariñas, referring to the late chief justice whom he helped impeach in 2012 over misdeclarations in his Statement of Assets, Liabilities, and Net Worth. (The property is under your name. That was what Chief Justice Renato Corona also said.)

Jambaro maintained she would never steal from the government.

Fariñas, however, eventually stopped questioning Jambaro and proceeded with moving for the release of the detained Ilocos Norte officials. (READ: #AnimatED: In this corner, Marcos vs Fariñas) – Rappler.com