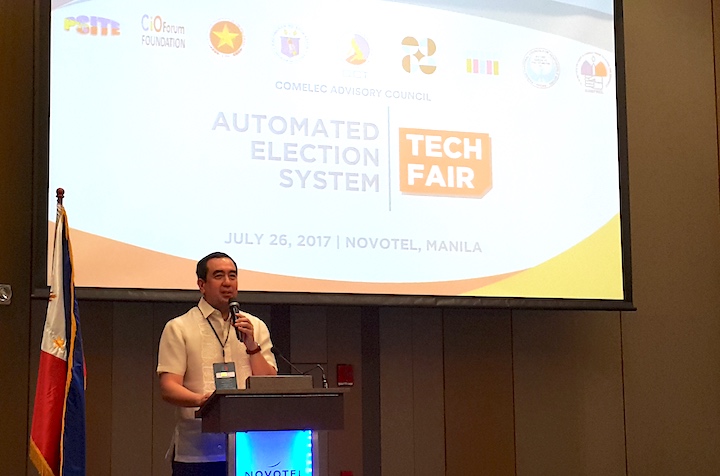 MANILA, Philippines – With the next elections less than two years away, the Commission on Elections (Comelec) has started going over options on what technology to use in the 2019 polls.

On Wednesday, July 26, Comelec chairman Andres Bautista said the poll body, in a workshop with the Comelec Advisory Council (CAC), is currently considering 6 options on what automated election system (AES) solution to implement in 2019 and in succeeding polls:

“The Comelec is open to all possible options,” Bautista said in a keynote speech at the AES technology fair organized by the CAC.

The poll body, he added, has “nothing but the voting public’s interest at heart, and we continue to look for ways to improve and enhance voting experience.”

For his part, Department of Information and Communications Technology Secretary Rodolfo Salalima said that Filipinos “must stand for the truth behind every vote contained in each ballot.”

The AES technology in the 2010, 2013 and 2016 automated elections were provided by Smartmatic, which had faced controversy over the conduct of the said polls.

Bautista said the AES fair allows the public to see the different solutions offered by these companies.

The technology fair will aid the CAC in recommending to the Comelec “the most appropriate, secure, applicable, and cost-effective technology to be applied” in the automated election system, as mandated by Republic Act 9369 or the Election Automation Law.

Bautista also talked about the poll body’s timeline for the 2019 polls, and emphasized that time is of the essence to prepare for it.

Comelec’s roadmap, he said, is “heavily dependent on an early release of the CAC recommendations.”

He clarified, however, that CAC’s recommendation will not automatically be the one applied in the 2019 polls. While CAC’s report would carry weight, he explained in Filipino, “whatever our decision, we must be able to explain our basis for it.”

Upon receipt of CAC’s report, the Comelec plans to conduct public consultations nationwide “to get the pulse of stakeholders and the general public,” said Bautista.

He also hopes the Joint Congressional Oversight Committee (JCOC) on the Automated Election System to reconvene soon. “It will be ideal if we can present to the JCOC our roadmap and timelines that will assure them of our capacity to conduct well-organized, well thought-out elections.” – Rappler.com