Tagbanua to Nickelodeon: ‘We don’t need an underwater theme park in Coron’ 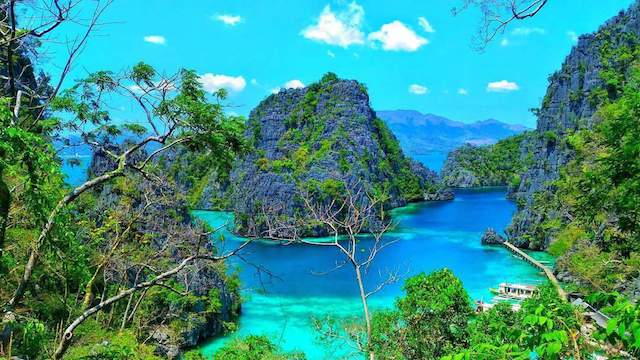 PUERTO PRINCESA, Philippines –  The Tagbanuas of Coron are a unique indigenous people whose beliefs and way of life had been shaped by the islands and the vast waters they live in.

This tribe had struggled for decades to secure their territory – a 24,264-hectare land and seascape around the municipality of Coron. They had to deal with manipulation by outsiders, and battled local government opposition at every juncture.

In 2004, they celebrated victory with the conversion of their area from a mere “claim” to a certificate of ancestral domain title (CADT), under the Indigenous Peoples’ Rights Act of 1997. They were one of the first indigenous groups in the country awarded such a private title over both land and waters.

The Tagbanuas serve as stewards of their 17 lakes and 11 lagoons, notably the iconic Kayangan and Barracuda Lakes and the famous Twin Lagoons. These Tagbanua-managed sites have made Coron town a tourism magnet, luring throngs of tourists from across the globe.

Every year, the Tagbanua elders go to their designated sacred places to perform a ritual and give offerings to the “unseen guardians” for them to receive continuous blessings.

In 2001, the Tagbanua tribal council decided to open to the public some of parts of their domain often visited by tourists – as a tourism enterprise – even as they continued with their traditional livelihoods based on fishing and agriculture.

Each morning, men in paddle boats venture out into the surrounding seas to do spear fishing. “We usually bring home danggit (rabbitfish) and molmol (parrotfish), among other sea food, to feed our family,” Armil Pe Abella, a father of 8, told Palawan News in Filipino.

Women at home, meanwhile, weave colorful mats using dried pandan leaves, which they sell in town for P200 to P500. During the rainy season, they help their husbands plant carbohydrate-rich crops like rice, corn, and sweet potato; and vegetables that are easy to grow like string beans.

Their children help their parents however they can. In their spare time, they perform tribal dances either to entertain visitors or just for fun.

“We’re contented with the simplicity of life there and we’ll forever remain that way,” said 40-year old Abella, who sits as a board member in the Tagbanua Tribes of Coron Island Association, Incorporated (TTCIA).

Coron is not just a place of ecological importance boasting spectacular sceneries but also a place of cultural value that needs to be preserved.

But their self-reliant community, Abella feared, might stand to lose its wealth of natural resources if the government allows a massive tourism development in their ancestral domain.

“Chances are, we’ll not be able to do our traditional practices should we let them in,” he said.

For one, Viacom International Media Networks, the global media company that owns Nickelodeon, announced in January its plan to build a tourist attraction in Coron, with Coral World Park as the project’s developer. (READ: Nickelodeon to build Philippine underwater theme park) 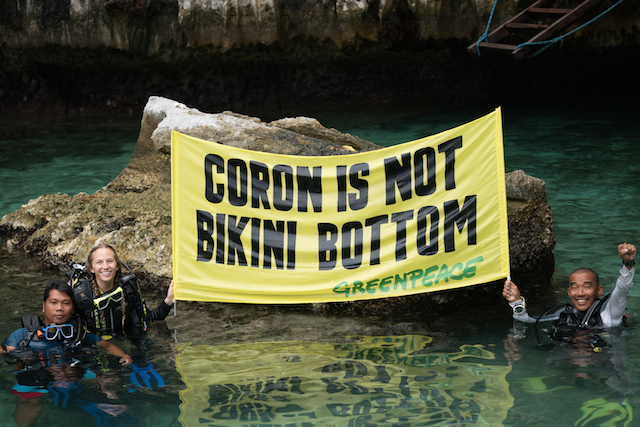 Slated to open in 2020, the ambitious project eyes to develop a 400-hectare area, with 70 hectares set aside for the resort’s accommodation and 30 hectares for the themed attraction. Viacom touted it as “Nickelodeon’s first resort in Southeast Asia.”

The planned attraction has drawn flak from environmental and civil society organizations. An online petition against the project had garnered over 250,000 signatures. (VIRAL: Environmentalists gather signatures to protest Nickelodeon park)

“There is nothing entertaining and educational about destroying a biologically important and fragile ecosystem that provides food, livelihood, and various ecosystem services, including cultural identity to indigenous peoples,” Vince Cinches, Oceans Campaigner of Greenpeace Philippines, said in a press conference in Puerto Princesa Thursday, July 27. (READ: Wanda Teo: Nickelodeon theme park in Coron ‘pushing through’)

The TTCIA expressed its opposition to the project in a petition signed by 15 tribal justices, the Tagbanua Council of Elders, and members of the tribe.

“We do not need an underwater theme park in Coron,” the TTCIA said in its petition-letter delivered by its representatives to the Department of Environment and Natural Resources (DENR) office in Quezon City last week.

The group posed an important question to the government, which has the final say in the fate of the project: “What and who will benefit in the construction of artificial platforms, such as the proposed Nickelodeon undersea theme park, which will undoubtedly destroy Coron’s marine ecosystems?”

“The legitimate owners of Coron, if the planned attraction is realized, will lose access to our land, our waters, and will negatively affect our culture and way of life,” it added.

“It says that the kind of tourism that needs to be promoted in northern Palawan should be community-based, indigenous-oriented, nature-appropriate and biodiversity-responsive,” said Mayo-Anda. “It doesn’t mention the need to build a big artificial structure that would endanger biodiversity in the area.” 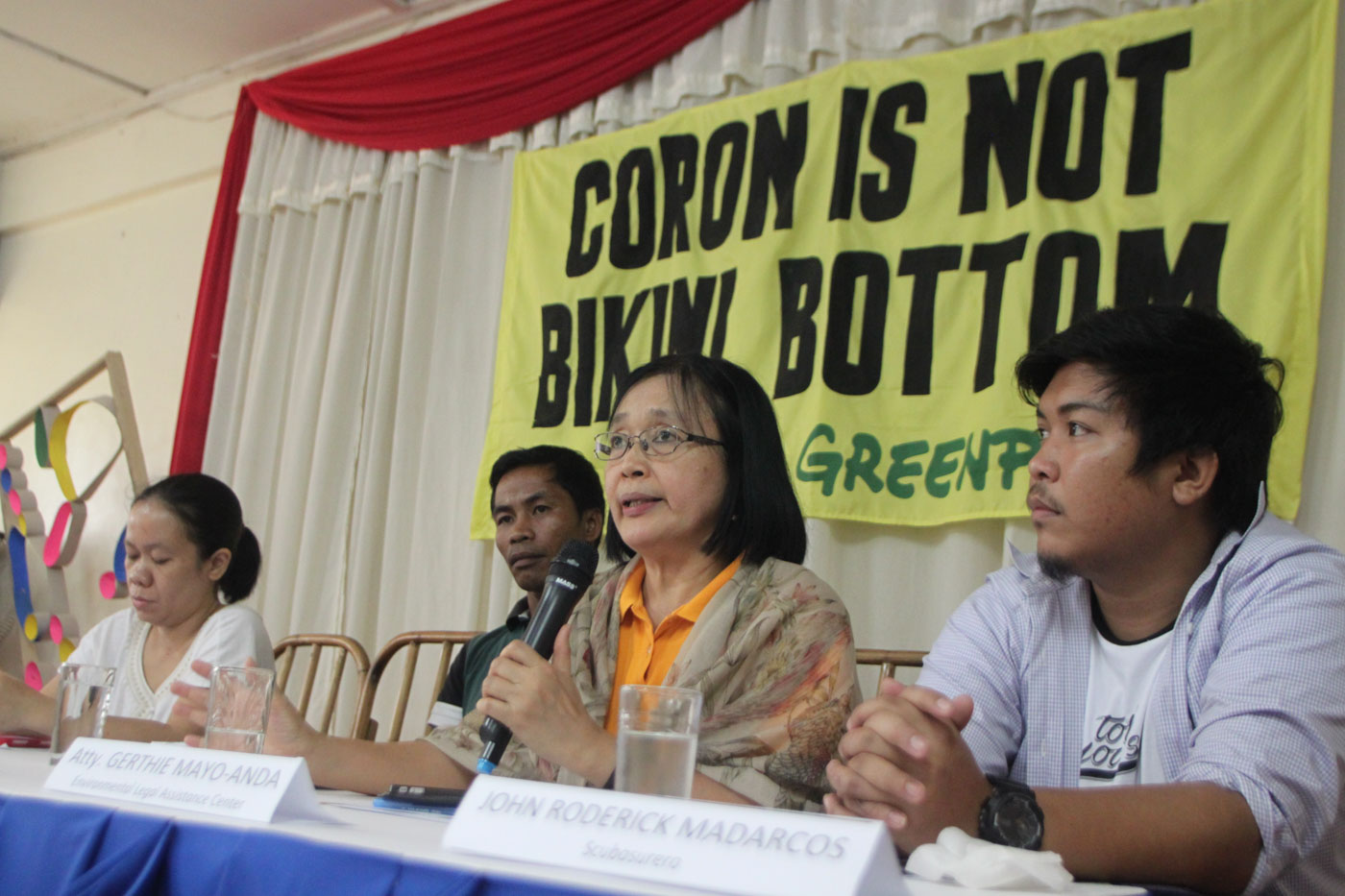 She said this is “a test to the Palawan local officials as to the type of tourism” they really want to pursue for the province, the country’s last ecological frontier and a UNESCO-declared Man and Biosphere Reserve.

Instead of becoming “investor-accommodating” by amending the supposed core or no-take zones in the province, the environmental lawyer challenged the government to “put that plan into reality” and “become proactive not reactive in telling them (Viacom and WCP) the do’s and don’ts and the whys and wherefores.”

She also hit back at politicians who are criticizing environmental non-governmental organizations (NGOs) for “magnifying the issue.”

“We need vigilance in this province because if we’re not vigilant and active,” projects non-compliant to environmental standards will just sprout, a common sight in Palawan, she said.

Cinches, meanwhile, urged Viacom to end its partnership with CWP which his group found to have “no historical background of any conservation effort anywhere else in the Philippines.” (READ: Developer backtracks on Nickelodeon underwater park in Palawan)

“Drop this outrageous project as early as possible, or else face a possible reputational backlash,” he warned, adding that the CWP had yet to submit a master plan since its announcement. (READ: Coron mayor: No permit applications yet for Nickelodeon theme park)

Cinches said they will tap other Greenpeace offices across the world to pressure Viacom in their respective countries.

Meanwhile, Mayo-Anda said legal action would be a last option “if push comes to shove,” and vowed to monitor possible “unlawful purchase of lands” in the area. (READ: DENR chief vows inquiry into Nickelodeon theme park in Coron)

For Abella and other Tagbanuas in Coron, the battle to protect their ancestral domain has just started.

“Coron Island is a natural paradise. It doesn’t need to be developed into a man-made paradise,” he said during the press conference. – Rappler.com