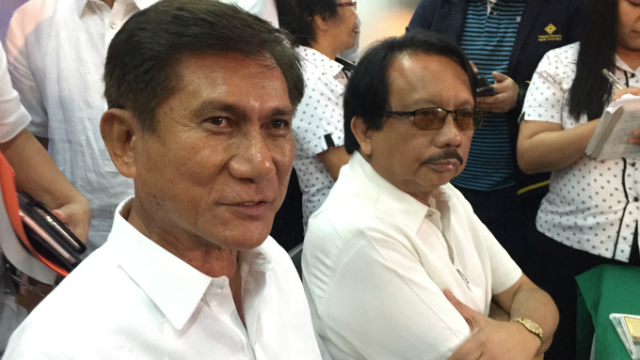 MANILA, Philippines – Environment Secretary Roy Cimatu on Monday, July 31, said his department cannot release yet the results of their ongoing review on the mining operations that were ordered closed or suspended by his predecesoor.

“Our self-imposed [deadline is] we will try to complete by July, and this is the end of July. I’m afraid that we cannot release it today. In due time we will announce it,” Cimatu told reporters after signing a memorandum of agreement with the Volunteers Against Crime and Corruption on Monday.

He said one reason for the delay is the “very voluminous” documents they have to go over for the review. When asked if they have a new deadline, Cimatu said he does not want to pressure his team.

“I don’t want to rush them because this is really an exhaustive review, because this is [a] reconsideration, this is not the initial case, so we need to get all the evidence the company gave,” he explained in a mix of English and Filipino.

Mines and Geosciences Bureau Assistant Director Danilo Uykieng said that of the 28 mining operations that were ordered closed or suspended by former Environment Secretary Gina Lopez, 15 appealed before the Office of the President, while 13 filed a motion for reconsideration with the Department of Environment and Natural Resources (DENR).

On Monday, Cimatu also talked about Lopez’s other controversial policies on open-pit mining and mining in watersheds.

“There was a department order of the previous secretary, the ban on open-pit mining, and it still stays. This is a policy, and you know DENR, we implement policies,” the environment secretary said, adding that he brought the issue up in a meeting with the Mining Industry Coordinating Council.

Cimatu also insisted there definitely won’t be mining in watersheds under his leadership.

Asked what he meant with “watersheds,” he explained: “It is as generic as saying we have established proclaimed watersheds in the country ever since. That’s specified already. This is the problem: the proclamation of the watershed came later than the mining [applications].

In February, Lopez announced they will cancel 75 mineral production sharing agreements (MPSAs) in watersheds all over the country.

DENR has since issued show cause orders to the concerned mining companies, asking them to explain why their MPSAs should not be cancelled for being in a watershed.

Uykieng said mining companies responded already to the DENR, and their responses are now being reviewed by the department.

“But the law provides that mining is prohibited in a proclaimed…critical watershed, so that’s what’s in the law. So based on the responses of the company, DENR will review it. So when that time comes, we will be releasing the result of the review,” he added. – Rappler.com