MANILA, Philippines – The Department of Health (DOH) said on Tuesday, August 1, that the Philippines now has the “fastest growing” HIV epidemic in Asia Pacific.

Health Secretary Paulyn Ubial made the announcement in a press conference, citing the latest data from the UNAIDS Report on global HIV epidemic states.

“The Philippines has become the country with the fastest growing HIV epidemic in Asia and the Pacific, and has become one of 8 countries that account for more than 85% of new HIV infections in the region,” said Ubial. Ubial said 85% of the new HIV infections among Filipinos are among males who have sex with males, which the DOH refers to as MSMs.

Genesis Samonte, chief of the DOH’s Public Health Surveillance department, clarified that the infections do not only cover gay men.

“Now let me clarify: We’re not talking about those that are openly gay… What we’re saying is any male who has sex with another male for whatever reason, is at risk for getting HIV based on our data,” said Samonte.

Two out of 3 new HIV infections will be among 15 to 24-year-old MSMs, with only a few young men fully aware of HIV, its symptoms, and treatment. 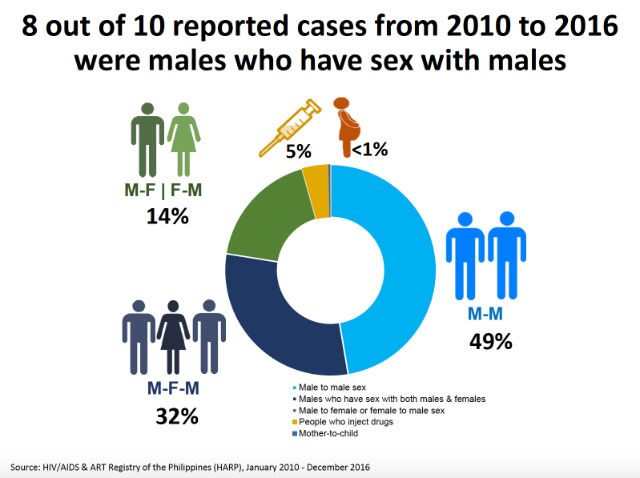 Samonte said risky sexual behavior among MSMs happens at a young age, with the first sexual encounter happening at 16 years old. Most only get tested for HIV at 22 years old. This is problematic, Samonte said, because latency in HIV can last for 10 years.

“It’s very possible that you only have a few more years left [to live] if you don’t get access to [treatment],” said Samonte.

“HIV testing is not the end goal. HIV testing is only a bridge to life-saving treatment… The issue is that so many people are getting tested but don’t get treatment,” said Samonte.

The latest HIV/AIDS and ART Registry of the Philippines reported a total of 1,098 new cases of HIV infections among Filipinos in May.

This is the highest recorded number of cases since 1984 – the year the first AIDS case in the Philippines was reported. A total of 29 Filipinos are reported to be infected with HIV daily.

Ubial acknowledged that since new infections are hitting young MSMs, the issue of stigma remains a big obstacle in getting tested.

“We believe stigma plays a role in the low, shall we say, acceptance to testing and getting treated. Because I think there’s still a lot of fear and also, shall we say, denial among certain population groups that they will not be infected,” said Ubial.

The youth may be too embarrassed to inform their parents or relatives that they want to go to a testing center, or vice versa.

“If parents are not comfortable talking to their teenage children, then we ask them to also come to the health facility and the DOH will help them and counsel their children. And also, it is being taught in the school,” said Ubial.

Owie Franco, president of Pinoy Plus Advocacy Pilipinas, said they even have members who have profiles in online dating applications and websites who urge users there to get HIV tested. Franco heads a non-governmental organization composed of Filipinos who are HIV-positive.

The DOH suggested 3 ways to prevent new infections, with informing the public about HIV topping the agenda.

Samonte said they are also encouraging Filipinos to resort to abstinence or delay their first sexual encounter.

“Of course, if you do not have sex, you will not get HIV… We want them to wait when they’re ready and as much as possible, delay it as long as possible,” said Samonte.

The DOH is urging those who are sexually active to always use condoms. The health department previously considered the idea of distributing condoms in schools, but this plan was eventually rejected by the education department.