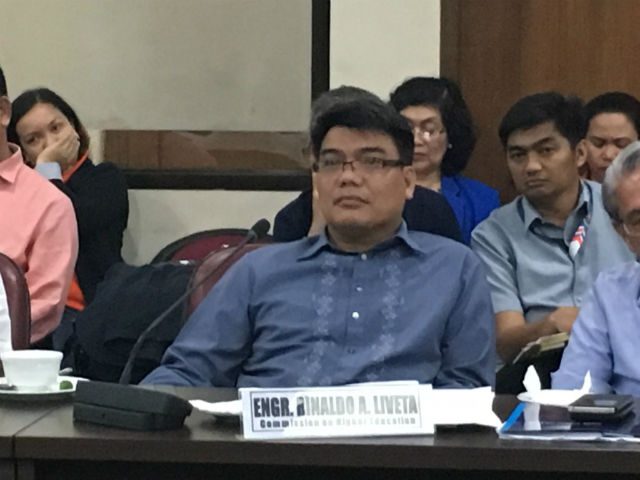 Facebook Twitter Copy URL
Copied
Under CHED's new order, student applicants would have to shoulder their drug testing cost should the university they're applying for include it in the admission requirements

MANILA, Philippines – The Commission on Higher Education (CHED) said student applicants would have to shoulder the cost of mandatory drug testing should it be included among the admission requirements of the schools they are applying for.

Ronaldo Liveta, officer-in-charge for the Office of the Student Development and Services, revealed this as CHED defended its proposed P13.523 billion budget for 2018 before the House appropriations committee.

Kabataan Representative Sarah Elago asked CHED how it plans to fund its memorandum allowing higher education institutions (HEIs) to have mandatory drug tests among students. The same memorandum allows HEIs to include a drug test among the admission requirements.

Liveta said the funding for current students’ drug tests will be taken from the HEIs’ budget. But it would be an additional cost for those applying to the university or college.

“Once they are required, the student must pay, the prospective student, because they are not the student yet. They have to shoulder the charge here,” he said.

Elago, however, urged CHED not to implement the memorandum because it makes students vulnerable to President Rodrigo Duterte’s bloody war against drugs. (READ: Mandatory drug tests could lead to ‘tokhang’ in schools, warns students’ union)

The administration’s anti-drug campaign has led to more than 7,000 killings linked to police operations and apparent summary executions nationwide.

“Nananawagan ako [na[ ‘wag natin ito i-implement (I am urging you not to implement this). It would do more harm than good sa ating mga estudyante (on our students),” she said.

Elago said she spoke to some students of Cagayan State University, who told her that the university had already asked the help of the police to help administer the mandatory drug testing there.

She was referring to the Philippine National Police’s Oplan Tokhang, where police officers literally knock on the door of suspected drug users and pushers to give them a chance to surrender voluntarily.

“You’ll have blood on your hands,” said Tinio.

An option, not a requirement for HEIs

She said the commission is not requiring universities and colleges to have mandatory drug tests, but are simply giving them the option to do so. The CHED order will only take effect from school year 2018 to 2019.

“Basically though, it’s very clear na we’re not prescribing anything. We’re just allowing them. Even allowing would be very dangerous?” said Licuanan.

She also clarified the Cagayan State University is conducting the mandatory drug testing because it decided to do so on its own.

Liveta added CHED does not intend to penalize students.

“The government wants to help the students who are found positive through intervention programs,” he said. – Rappler.com