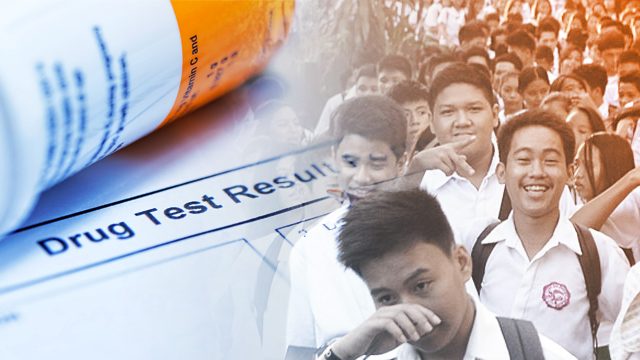 Facebook Twitter Copy URL
Copied
'Hindi ito tokhang-tokhang....We’re doing this with an open-mind. We’re doing this as scientifically as possible,' says Education Secretary Leonor Briones as she guarantees the confidentiality of the results

MANILA, Philippines – The Department of Education (DepEd) will begin  its random drug testing of students and teachers in public and private high schools in September.

Education Secretary Leonor Briones said this would allow her department to determine the prevalence of drug users among students and teachers and help assess the effectivity of school-based and community-based prevention programs. (READ: Drug tests for public school teachers to start during school year 2017-2018)

“We have developed a sampling scheme with our statistical experts so we will be able to capture the picture of the situation among our learners and teachers [in terms of prevalence of drug use],” Briones said in a press briefing on Tuesday, August 15.

The education chief, however, guaranteed the confidentiality of the drug test results, which will be processed by the Department of Health (DOH) and will run from September to October.

“We’re not going to identify who’s going to be included in the sample as well as specific names of those who will be identified as drug users. This is from the months of September to October,” said Briones.

She was referring to the Philippine National Police’s Oplan Tokhang, wherein police officers literally knock on the doors of suspected drug users and pushers to give them a chance to surrender. Such operations, however, have also led to deaths.

The drug war has claimed the lives of over 7,000 drug suspects in both legitimate police operations and apparent summary killings nationwide.

According to DepEd Order Number 40, series of 2017, parents will first be informed about the guidelines of the random drug testing through a regular or special general assembly or a parent-teacher conference. The students and their parents will also be notified about the procedure in writing.

Failure to return the acknowledgement slip of this notice “shall not be a bar to the conduct of the drug testing and of the said students’ inclusion in the sample,” the DepEd said in its department order.

“Parents have to be informed and treatment must be initiated especially for the children and of course, the teachers,” said Briones.

“This will not be a basis for taking a child out of school,” she added.

Meanwhile, CHED has given the green light for higher education institutions to conduct mandatory drug testing of students starting school year 2018 to 2019. The commission has since been criticized for exposing students to the government’s bloody war against drugs. – Rappler.com