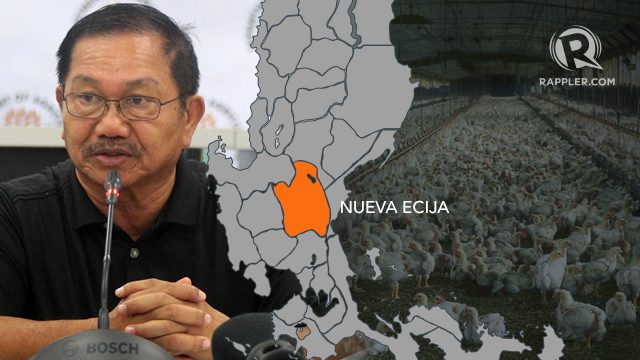 “There are two cases of bird flu in Jaen and San Isidro,” ANC quoted Piñol as saying in a text message.

Piñol said in an interview on GMA7 that the official confirmation was made following laboratory tests on the affected farms, after the DA received reports from farm owners and local officials.

He said that the two farms –  a quail farm in Jaen and a layer farm in San Isidro – “had been contained.”

Nueva Ecija is the second province in the country with confirmed cases of bird flu, after Pampanga.

On Friday, Health Spokesperson Eric Tayag said in a tweet that the health department has deployed a team to Nueva Ecija following confirmation of bird flu in the two towns.

Piñol had earlier said the DA would need P100 million to pay farm owners affected by the bird flu outbreak in Pampanga. This would be taken from the DA’s Quick Response Fund (QRF) which is with the Department of Budget and Management.

Prior to the confirmation of the Nueva Ecija cases,  the DA said it hoped to finish culling about 500,000 birds in Pampanga by Saturday, August 19. About 92,000 birds had been culled as of Thursday, August 17.

After officials have completed the culling of 600,000 birds and the disinfection of affected areas, they will wait for 21 days before deploying “sentinel birds” to the area to determine whether the virus is still present. Quarantine restrictions won’t be lifted until after a 90-day rest period.

The DA had imposed a ban on the shipment of birds and poultry products from Luzon to other parts of the country.

The Philippine Coast Guard said it was monitoring the unauthorized movement of livestock, partciularly from Pampanga,

The PCG ordered all its districts “to be on the look out of the unauthorized movement of livestock particularly from Pampanga and/or Luzon area to Visayas and Mindanao” to prevent the spread of the avian influenza or bird flu.

Commodore Joel Garcia, PCG officer-in-charge, said the movement of fresh uncooked poultry meat “must be accompanied by a shipping permit and health certificate issued by a government sector veterinarian.”

Garcia said the permit should certify that the products were sourced from farms not tainted by avian influenza for the past 21 days prior to shipment. – Rappler.com