AFP chief Año to be senior aide in charge of DILG 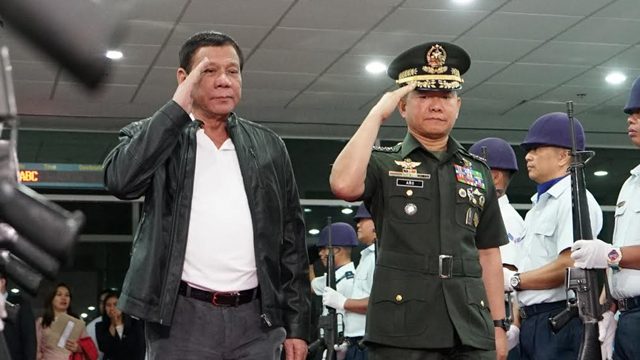 MANILA, Philippines – While he cannot yet appoint Armed Forces of the Philippines (AFP) chief General Eduardo Año as interior secretary, President Rodrigo Duterte will make him a “senior aide” under the Office of the President.

Another option is to make Año an “undersecretary,” Duterte said on Monday, August 21, during a dinner with media at the Malacañang Golf Club.

Año, in this post Duterte envisions, will have all the “responsibilities and mandate” to fulfill the functions of a Department of the Interior and Local Government (DILG) chief.

The AFP chief will hold this post until after October 2018, or one year after he retires from the military.

While Duterte announced Año’s appointment as the next DILG chief way back in May, the AFP chief cannot take on the post until a year after his mandatory retirement, based on Republic Act 6975. (READ: Why Duterte can’t appoint AFP chief Año as next DILG chief)

DILG officer-in-charge Catalino Cuy will stay in his post until Año can take over as secretary. After this, Cuy will go back to being a DILG undersecretary, said Duterte.

Año, a veteran intelligence officer and a 1983 graduate of the Philippine Military Academy, is set to retire in October this year. He was supposed to retire early as he was being eyed to take over the DILG in June, but when local terror groups attacked Marawi City in May, Año was designated the implementor of martial law declared over the entire island of Mindanao.

Año’s appointment to the DILG would be a second for a retired military general in the department, after the late Angelo Reyes, who was DILG secretary under the Arroyo administration. – Rappler.com