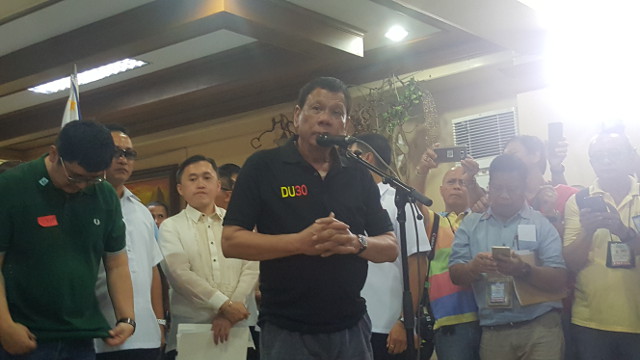 SAN FERNANDO, Philippines – After announcing that one of the top cops in his drug war will be assigned to Iloilo, President Rodrigo Duterte warned Iloilo City Mayor Jed Mabilog to end his supposed involvement in drug trafficking, or else.

(Truth be told, now while nothing is happening, you might want to end your drug connections.)

Duterte was asked if his assignment of Police Chief Inspector Jovie Espenido to Iloilo serves as a warning to government officials in cahoots with drug traffickers. The President previously identified Iloilo as among the most drug-infested provinces.

“I’ll tell you again, Mayor, dinadawit ka (you are being implicated). For the longest time, updated list, nandiyan ka (you’re on it),” said Duterte.

He warned Mabilog not to protect anyone involved in drug trafficking and not to call police for favors. Such acts would make him as bad as a drug lord in the President’s eyes.

“Do not protect, do not call the police, ganito na ganito (like this, like that). Do not just mess up with the – kasi ‘pagka nandiyan, drug lord ka rin eh, mapipilitan ako (because if you’re there, you’re also a drug lord, I’ll be forced to act). Bakit ka nag-protektor? (Why did you protect them?)” said Duterte.

To government officials and personnel in general, the President said if they weren’t happy with their salaries, they could become drug lords instead, but at a price.

Earlier that day, Duterte announced he was assigning Espenido to Iloilo.

Espenido has been police chief of two towns, both led by mayors in Duterte’s list of suspected narcopoliticians. Both mayors died while Espenido was police chief.

In Albuera town in Leyte, Mayor Rolando Espinosa Sr died while in detention, as police claim he fought back while they were serving a search warrant. In Ozamiz City, Mayor Reynaldo Parojinog, his wife, and 13 others were shot dead, also during a police raid.

Mabilog said on Monday that he welcomes Espenido’s reassignment to Iloilo, adding that they could learn from the cop’s “experience in fighting drugs.”

For his efforts in boosting Duterte’s anti-drug campaign, Espenido was awarded the Magalong Medal, Order of Lapu-Lapu by the President. He also received a special award during the Philippine National Police (PNP) Service Anniversary. (READ: Drilon expresses concern over Espenido reassignment to Iloilo) – Rappler.com