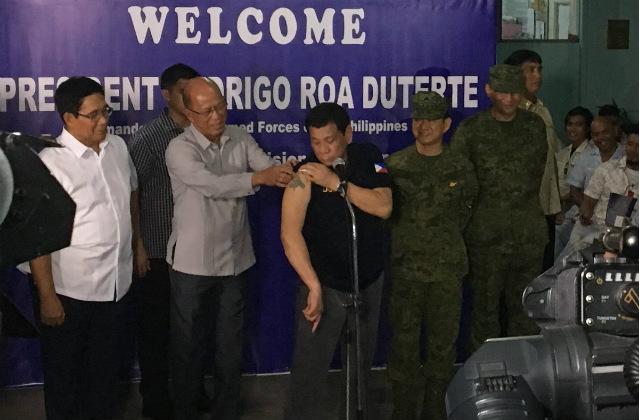 CAGAYAN DE ORO CITY, Philippines (UPDATED) – As the public demands to see if his son Paolo has the triad tattoo, President Rodrigo Duterte showed the media his own.

In a press briefing at the 4th Infantry Division headquarters, Duterte removed his jacket and rolled the sleeve of his shirt to show a tattoo of a rose on his right arm.

It’s a long-stemmed rose below the insignia of the Guardians Brotherhood, which he said his son Paolo also has on his arm.

The President was on a tirade against Senator Antonio Trillanes IV before he showed his tattoo. Duterte did not confirm nor deny a claim of the senator in a Senate hearing that his son, Davao City Vice Mayor Paolo Duterte, has the triad tattoo.

A triad is among the branches of Chinese transnational organized crime syndicates that operate in different countries. (READ: Powerful, dangerous, what are Chinese triads?)

Paolo’s refusal to show if he has a tattoo as Trillanes claimed stirred a lot of interest online. “No way,” he said.

Duterte said the public should be more interested in the tattoos of his other children, Davao City Mayor Sarah “Inday” Duterte and Sebastian “Baste” Duterte.

(What you should see is Inday’s tattoo. Did you see her back? She might be angry at me. Baste has it all over his body. Look at his hands, there’s’ tattoo all over.)

Duterte was at the headquarters of the 4th Infantry Division in Cagayan De Oro. He spoke to the media after speaking and pinning medals to soldiers wounded in Marawi City.

The 74 awardees on Saturday each received P110,000 cash, a pistol, and a mobile phone. – Rappler.com