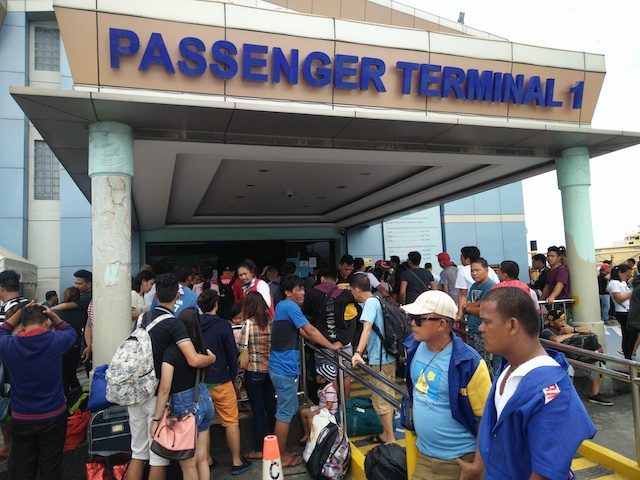 “Umuwi na lang ako kasi walang seguro kung paalisin ba ang boat (I decided going home since it was not certain if our boat would be allowed to leave),” said Violeta Ilasin, 40, who was hoping to reach her hometown in Pangasinan by evening on Wednesday, September 13, but Maring’s effects forced the cancellation of Manila-bound sea trips originating from Cebu City ports.

Ilasin was one of the hundreds of passengers who arrived at Cebu Pier Uno as early as 8 am on Tuesday, September 12, for a midday voyage, but the Philippine Coast Guard prevented all Luzon-bound ships to sail pending improvement of weather conditions.

“Mas mabuti sana na binigyan kami ng notice kahit text man lang na hindi makaalis ang boat para hindi na kami pumunta sa pier at maghintay ng matagal (It would have been better if we were notified, even via a text message, that our boat has been disallowed to leave so that we won’t come to the pier and wait for long),” Ilasin told Rappler in an interview.

Although Cebu and the rest of Central Visayas were not directly affected by the Maring’s arrival, strong winds were felt in the region, and rough seas were visibly noticed from afar, forcing authorities to put on hold some outbound sea travel.

Cebu visitor Alex Bernardo, who hoped to depart for Cavite City also by Wednesday, told Rappler he did not receive any advisory prior to his going to the pier for a midday voyage supposedly aboard a 2Go vessel.

“I came from a distant town. I have no other choice but to stay here,” said Bernardo in Tagalog, after learning that his boat trip was cancelled.

Pitronel Samson, a Cebu-based porter, said he pitied many of the passengers who were forced to wait outside the terminal building while they waited word from Coast Guard officials.

“Maayo unta nga makapahuway ni sila sa sud kay gikan pa sa layo nga biyahe ang uban (I hope these passengers would be able to get some rest inside the terminal building as some of them come from far places),” said Samson.

Meanwhile, sea trips from Cebu to the ports of Tagbilaran City in Bohol, Ormoc in Leyte, and Dumaguete City in Negros Oriental, and other neighboring islands in the Visayas regions were still permitted by the Coast Guard, though there were reports of trip discomfort due to the strong sea current and abnormally big waves spawned by Maring. – Rappler