Sep 14, 2017 3:41 PM PHT
Bea Cupin
Facebook Twitter Copy URL
Copied
'This is not a question of weakening their rights,' says Speaker Pantaleon Alvarez, after the House reduced the CHR budget for 2018 to a mere P1,000 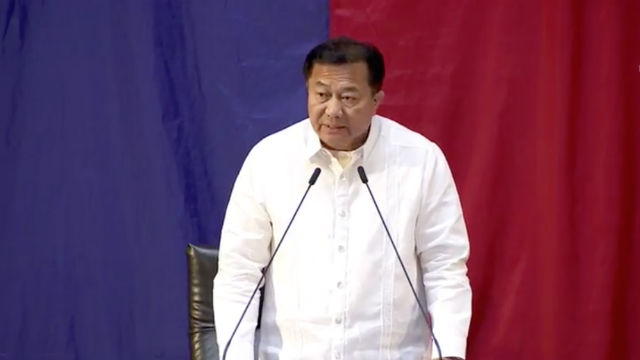 MANILA, Philippines – House Speaker Pantaleon Alvarez on Thursday, September 14, defended the House of Representatives’ decision to slash the proposed 2018 budget of the Commission on Human Rights (CHR) to a measly P1,000.

Alvarez insisted once again that the CHR was not doing its job properly and fairly.

(Our message at the House of Representatives is clear. We gave the CHR a P1,000 budget because it’s clear that they are not doing their job.)

(The CHR has this notion that its mandate only covers ensuring that state forces do not commit human rights violations against criminals. But it’s clear in the Constitution that they have to protect and ensure human rights of all people, not just of criminals.)

The CHR was created in 1987 through several articles in the Constitution, the Administrative Code of 1987, and Executive Order (EO) 292. Article XIII of the Constitution defines its functions. Under EO 292, issued in 1987, the CHR’s approved annual appropriations “shall be automatically and regularly released.”

In various posts on its official social media account, the CHR has explained that its primary function is to check and prevent possible abuses by state actors, including soldiers and police.

It pointed out that victims of criminals already have several institutions to make sure their rights are protected – the police, prosecutors, and the courts, among others.

Amid criticism, Alvarez insisted that the House’s move was not meant to cripple human rights in the country. (READ: Legislators explain yes, no, abstain, non-votes for slashed CHR budget)

“Again, this is not a question of weakening their rights, this is a question of accountability to the people. Kami po, representatives kami ng mga tao, kailangan we have to hold them accountable to the people dahil hindi nila ginagawa ‘yung trabaho nila, ‘yung tungkulin nila base sa mandato ng ating Konstitusyon,” Alvarez, himself a lawyer, said.

“Tabingi talaga ang utak noon. Paanong pinupulitika? Magpakita muna siya ng trabaho niya,” the House Speaker said. (His thinking is warped. How did we politicize it? He should first show that he’s doing his job properly.)

(Sure, he visited De Lima in jail. I asked, did you visit other detainees too? He said he didn’t because he had no time and other commissioners could do it. Why is he discriminating against others? Who is politicking here?)

(It’s clear. I think he was even Liberal Party chairman back then… He’s only defending the human rights of the Liberal, his party mates. That’s what he’s thinking about instead of the rights of all Filipinos.)

(Did the CHR talk about the Maute Group in Marawi? No. What’s their program? Nothing. How will they protect the rights of the innocent victims?)

Martial law was declared in Mindanao, following an attempt by the Maute Group to seize Marawi City on May 23. The crisis has yet to be resolved, and government troops have stepped up their presence in the area and neighboring provinces given the threat.

The CHR has consistently reminded the government – the military in particular – to uphold human rights as they implement martial law.

Alvarez, even during committee hearings on the CHR budget, repeatedly expressed disapproval over the commission’s supposed failure to exercise its mandate.

Despite the House’s controversial decision, it does not mean that P1,000 will be the CHR’s final budget for 2018. Once the House passes the budget on 3rd and final reading, it will transmit that bill to the Senate, which is holding its own deliberations on the proposed budget.

Any differences between the two versions will be ironed out through a bicameral conference committee, composed of representatives from both chambers. Senators have already pledged to defend the CHR budget.

Alvarez said that while he respects the Senate’s take on the CHR budget, it cannot simple dictate on the House.