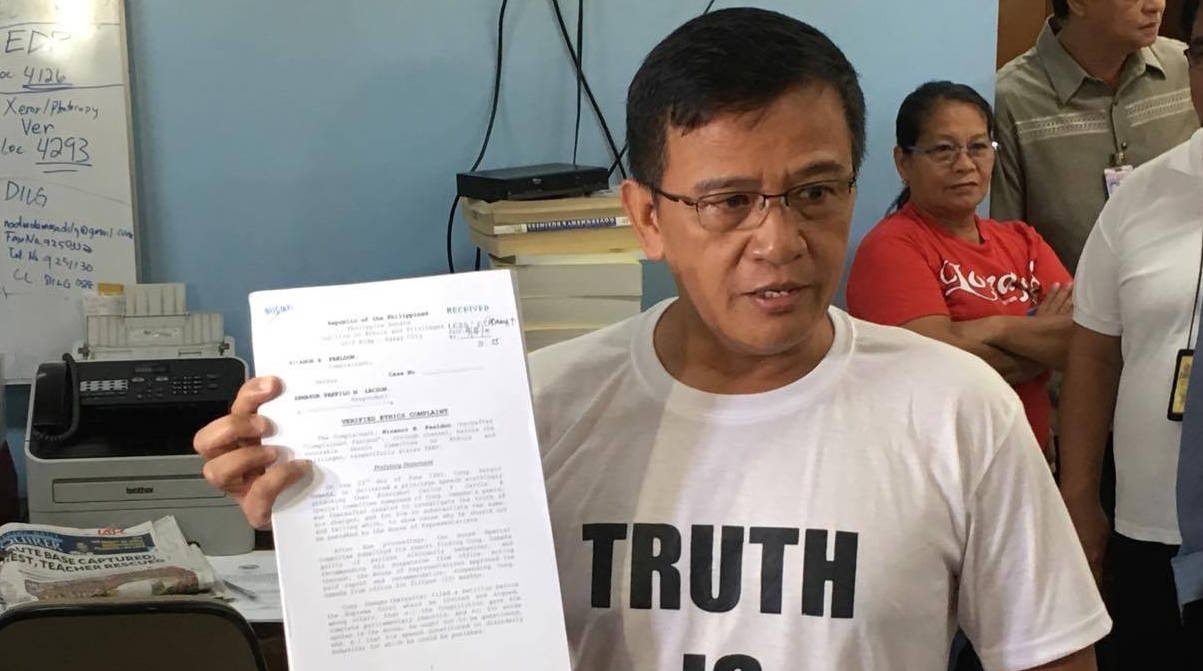 MANILA, Philippines (UPDATED) – After refusing to face a Senate probe into the alleged corrupt practices inside the Bureau of Customs (BOC), former BOC chief Nicanor Faeldon filed an ethics complaint against Senator Panfilo Lacson for the lawmaker’s privilege speech implicating him in the “tara” system.

Faeldon briefly went out of his Senate detention and filed his complaint before the Senate committee on ethics and privileges on Monday, September 18.

In his complaint, Faeldon slammed Lacson for the “lies” in his privilege speech, in which the senator accused Faeldon, and other BOC officials, of receiving “tara” or bribe money in exchange of smooth transactions on shipments.

“Senator Lacson, you are a liar. All your accusations againsts me are lies. Chief PNP ka dati (you were PNP chief before), you should know better. You should know how to handle investigations,” Faeldon told reporters in an interview.

It was under Faeldon’s watch that P6.4-billion worth of shabu were smuggled into the country, the focus of a Senate probe.

Since the privilege speech, the former Customs chief had refused to attend the Senate investigation, prompting the Senate blue ribbon committee to cite him in contempt.

Despite being subpoenaed, Faeldon insisted he would not attend the probe. He then turned himself in to the Senate Sergeant-at-Arms for detention, saying he prefers that to facing “unfair” senators.

To date, he has yet to answer questions on how the 604 kilos of shabu from China were able to slip past Customs.

Lacson, in response, said it is Faeldon’s right to file an ethics complaint but maintained privilege speeches could not be used against senators.

“Good luck to him. And sabi ko na rin (And like I said), that’s his right. But the Constitution is clear. And his lawyers should know that. He can file and file and file and file. Ang response ko sa kanya (My response to him is), I’m also filing a criminal case against him sa Ombudsman,” Lacson said.

It remains unclear if Faeldon’s complaint would prosper, as the 1987 Constitution protects legislators from suit for speeches or debates made in Congress.

Article 6, Section 7 states that “a Senator or Member of the House of Representatives shall, in all offenses be punishable by not more than six years imprisonment, be privileged from arrest while the Congress is in session. No Member shall be questioned nor be held liable in any other place for any speech or debate in Congress or in any committee thereof.”

Senate rules also state that members of Congress cannot be prosecuted for any words spoken in debate or in connection with voting or used in written reports or with things generally done in a session of either House in relation to the business before it.

“The purpose of this privilege of speech or debate is not to protect the members against prosecutions for their own benefit but to enable them as representatives of the people to execute the functions of their office without fear of prosecution, civil or criminal,” it states.

Asked about it, Faeldon said: “It does not guarantee them they can lie, [that they can accuse] innocent people like me.”

He also said he would file a case before the Supreme Court to challenge the doctrine.

Lacson is the vice chairman of the Senate ethics panel, which is headed by Majority Leader Vicente Sotto III. – Rappler.com