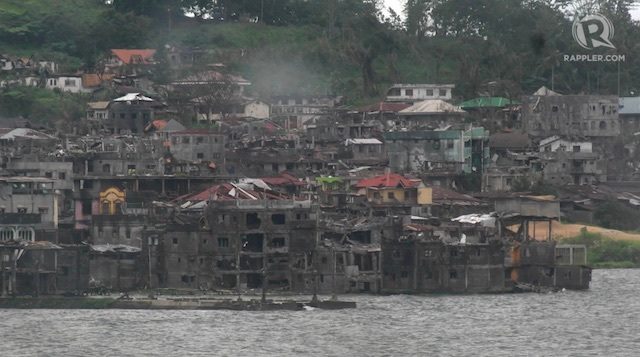 MANILA, Philippines – Armed Forces of the Philippines (AFP) chief General Eduardo Año said on Monday, September 18, ending the conflict in Marawi City, Lanao del Sur, would be easier from now on as troops only need to reclaim 10 hectares of the Islamic city’s area and about 50 hostages.

“They (terrorists) are now restricted to [a] 10-hectare area. Hindi na ‘to magtatagal, madali na ‘to eh (This will not last long, it is easier now). We just cannot give you a specific timeline, but we will do it according to our operations plan,” Año told reporters during a briefing in Camp Aguinaldo.

While Soganub’s rescue brought a sigh of relief to authorities, Año said there are 45 to 50 hostages yet to be saved, for whom he promised the troops would come with haste and caution.

The reclaimed grand mosque is one of 3 enemy strongholds, while Soganub was a hostage who was taken during the first week of the siege, coerced in a video to air the demands of the homegrown terrorists.

Año said the Maute brothers, who were behind Marawi’s ruins, have all been killed, save for Omar, leaving him and Isnilon Hapilon as the last high-value targets by the military. (READ: Terror in Mindanao: The Mautes of Marawi)

Asked about the number of foreign terrorists assisting the Islamic State-inspired local terrorists, Año said, from standing at 40, they have been reduced to 10.

Año said they did not disclose immediately how they rescued Soganub for the safety of other hostages who may still be in the area.

Entering its 120th day, the battle in Marawi has claimed the lives of at least 673 enemies, 47 civilians, and 149 soldiers and cops. Hundreds of thousands also remain displaced. – Rappler.com