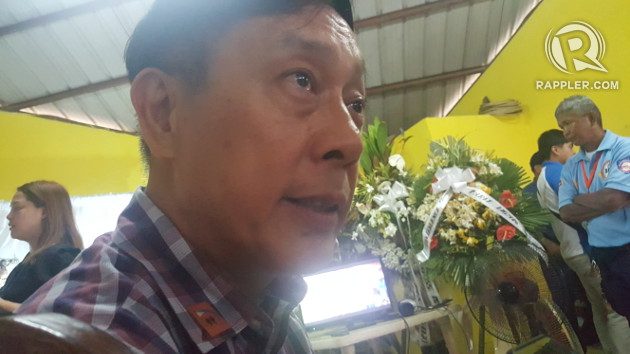 MANILA, Philippines – Department of Interior and Local Government (DILG) officer-in-charge Catalino Cuy backs President Rodrigo Duterte’s suggestion of body cameras for police, but says the funds for this doesn’t have to come from the budget of the Commission on Human Rights (CHR).

Body cameras and even cameras for police car dashboards can help keep police personnel honest, he said on Monday, September 18, during the wake of a Caloocan policeman.

“If that pushes through, that’s a very good addition to our law enforcement. It will record the operation itself so that’s where you can see what actually happened,” he said in a mix of English and Filipino.

Asked if he thinks the budget should come from the CHR’s proposed P678 million budget, he said a separate budget should be made. Using the CHR-intended funds was Duterte’s idea, his contingency if Congress allocates only P1,000 for the CHR for next year.

“I hope it can be an additional budget,” said Cuy.

“It would also help the police so they aren’t wrongly since everything was recorded,” said Cuy, himself a former Davao City police chief

In other countries, body cameras and radios for police going on operations are standard

To update the police force, the DILG and the PNP have already requested for such equipment, said Cuy

Given possible limitations on funding, it’s possible not all members of a police team will be given body cameras

“We were planning, together with the PNP, for even just one member of the team, at least one of them, is carrying a body camera,” said Cuy.

He said priority would be given to police personnel who serve warrants, especially for high-value targets, and those going on operations. – Rappler.com