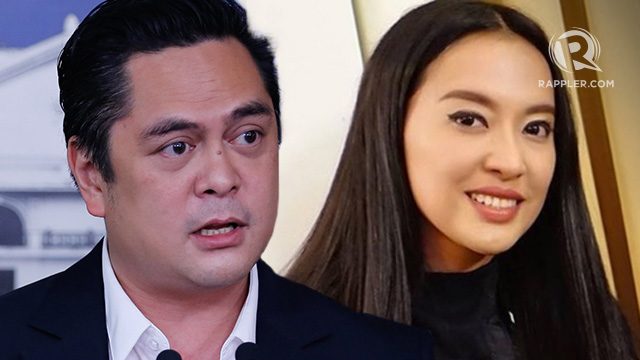 The topic was discussed on Wednesday, September 20, during the Senate hearing on the proposed P1.35 billion of the Presidential Communications Operations Office for 2018.

“I would have wanted Secretary Uson to answer some questions,” Senator Joseph Victor Ejercito said.

Uson, a staunch supporter of President Rodrigo Duterte, has been repeatedly spreading fake information on her social media account.

Andanar said Uson is in New York with Foreign Affairs Secretary Alan Peter Cayetano, who is attending the 72nd Session of the United Nations General Assembly.

Responding to issues against Uson, Andanar said she told him that her Facebook page is her own and does not reflect the views of the PCOO.

“With the issue kay Asec Mocha Uson, nagkaroon po kami ng agreement, actually siya mismo nagsabi na ang kanyang Facebook page ay sa kanya lamang at kung anong sasabihin niya ay kanyang sariling opinyon at di po ito reflective sa PCOO. She really insists ganoon po magiging sistema,” Andanar told senators. (With the issue against Asec Mocha Uson, we had an agreement. Actually, she was the one who told me that her Facebook page is her own and whatever she says there is her own opinion and is not reflective of the PCOO. She really insists that the system should be like that.)

“But there’s also a debate, Mr Chair. If you’re a political appointee, do you stop being political? We all know that Asec Mocha Uson is one of the staunch allies who would fight tooth and nail for the President,” he added.

Andanar defended Uson and said she still enjoyed the support of the President despite the bashing. Case in point, he said, is Uson’s frequent travels with the President especially to “sensitive places” like Marawi City.

“Kahit na po maraming puna kaya Asec Mocha, literal binabash siya at meron ng mga #firemocha na lumalabas, she still continues to fly with the President wherever he goes, especially in sensitive places. So that goes to show Asec Mocha enjoys the trust and the confidence of the President,” Andanar said.

Andanar then thanked the senators for their “reminders.”

Uson has repeatedly criticized journalists by calling them “presstitutes,” or journalists paid to write biased and inaccurate news.

Uson has been caught posting wrong information online. In May, she posted a photo asking for prayers for the Philippine Army which turned out to be a photo of the Honduran police. Uson defended her post, calling it symbolism.

In August, she posted a story about a killed cop and used it to hit members of the opposition for supposedly using for propaganda the death of 17-year-old Kian Lloyd delos Santos in the hands of the police. It turned out that the story was published over a year ago.

President Duterte later on admitted that he just “invented” those bank account numbers as “bait.” – Rappler.com