‘PH failed to detect signs that led to Marawi’ – expert 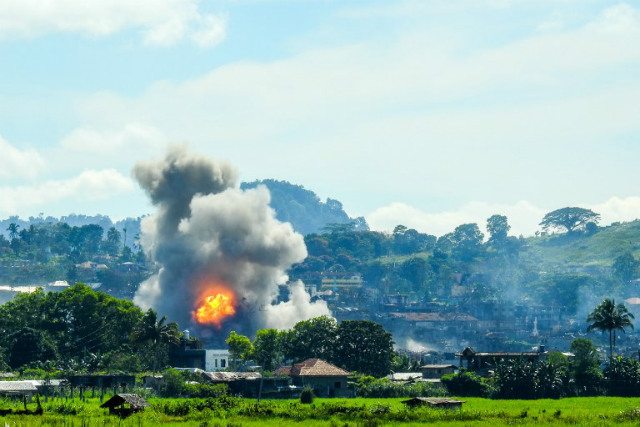 MANILA, Philippines – Terrorism expert Rohan Gunaratna criticized the Philippine government Friday, September 22, for failing to read signs of the “build-up” of the terrorist Islamic State (ISIS) in the Philippines, leading to the siege of Marawi City.

“The Philippines failed to detect, to read, the indicators, the signs, and the clues that led to Marawi. We have to acknowledge that,” Gunaratna said on Friday.

“If governments do not understand to read the indicators, then another Marawi is inevitable in this region,” he also said.

Gunaratna was speaking at the Association of Southeast Asian Nations (ASEAN) Conference on Peace and the Prevention of Violent Extremism in Southeast Asia at the Philippine International Convention Center (PICC) in Pasay City.

The expert was referring to the May 23 siege of Marawi by the terrorist Maute Group, which is linked to ISIS. (READ: Terror in Mindanao: The Mautes of Marawi)

The Marawi siege triggered clashes with the Philippine military, and prompted President Rodrigo Duterte to put Mindanao under martial law.

The Marawi clashes have killed at least 147 government forces, 45 civilians, and 660 terrorists. The crisis has also forced more than 600,000 Filipinos out of their homes.

‘Not an intelligence failure’

In a speech, Gunaratna pointed out that the Marawi siege “is not an intelligence failure,” but “an operational failure.”

“It is a failure of government to act based on sound and timely intelligence,” he said.

He explained that before the Marawi siege, the Philippine intelligence community had already produced 4 reports on the “build-up” in Marawi. The latest of these reports was published on April 14.

“So you can see that as we look at the expansion of IS in the Southeast Asian region, for governments, it is very important to read the signs, indicators, and clues of the build-up of groups in certain cities,” he said, referring to ISIS by its other acronym, IS.

He added that the expertise of ISIS “is distinct” from that of terror groups Al-Qaeda, Taliban, and Jemaah Islamiyah, “which was largely fighting in the rural areas.”

In contrast, he said, “if you look at IS, it was always moving from the desert to the cities,” such as Mosul and Raqqa.

Gunaratna also said that “IS central advised those groups that occupied Marawi on how to conduct the battle in Marawi.”

He cited advice from “IS central” on May 24, just a day after the Marawi siege. This was for the Maute Group to “quickly get a drone up,” as the Armed Forces of the Philippines approached Marawi. “So you can see the guidance.”

At the same time, Gunaratna noted that President Rodrigo Duterte “acknowledged that IS is operating in the Philippines.” (READ: Duterte says martial law due to ISIS threat)

“Unfortunately, the previous leaders, the previous bureaucrats, said there’s no IS in the Philippines. So I think that the President understood that to fight IS, he needed to identify them,” Gunaratna said. (READ: Admit ISIS presence in Philippines, analyst says)

“Identifying the problem itself is 50% of the solution,” he said.

Former Philippine president Fidel V Ramos, who was in Friday’s event, also gave his own “very sound advice” on the Marawi crisis.

“The Marawi uprising could have been prevented if only there was more of what we call in ASEAN ‘musyawarah-mufakat.’ What is that? Musyawarah means consultation. Mufakat means consensus,” he said.

Consultation, he said, can be done through the government mechanism called Legislatic-Executive Development Advisory Council (Ledac).

Ramos, who endorsed Duterte for president, said “consultation” has taken a different form under the former Davao City mayor.

“Now the consultation is only among the party leaders. Ano ‘yon?” (What’s that?) – Rappler.com